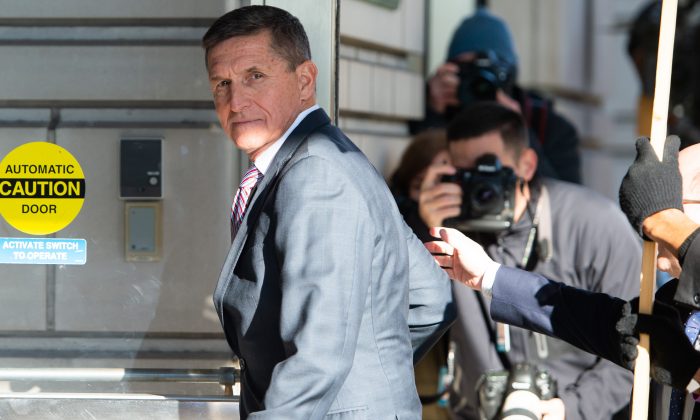 Flynn Case: In a Sign of Urgency, Appeals Court Sets Hearing in 10 Days

A federal appeals court has set a tight schedule for a hearing in the case of former Trump adviser Lt. Gen. Michael Flynn, who’s accusing a lower level judge of undue delay in dismissing his case.

The District of Columbia ordered on June 2 an oral argument in 10 days, when it will hear from Flynn’s lawyers, the Department of Justice (DOJ), and from a lawyer for District Judge Emmet Sullivan on whether the judge does or doesn’t have the authority to delay ruling on the DOJ’s motion to dismiss the case.

The 10-day notice is tighter than it may seem, said appellate attorney John Reeves, former assistant attorney general of Missouri, in a June 2 series of tweets.

“For non-lawyers, a ten day notice for oral argument may seem like a long time, but it isn’t. It’s an increidibly [sic] short amount of time,” he said, noting that the usual time would be 30 days or more.

“The setting of oral argument shows that the DC Circuit is gravely concerned about this matter, and wants to hear further from all sides,” he said. “This will give the DC Circuit the opportunity to pepper Sullivan’s lawyer with as many questions as they want about the arguments raised in her brief. They can interrupt her as much as they want.”

Sullivan has so far refused to affirm the dismissal and has instead laid out a schedule that would prolong the case for possibly months. He’s appointed former federal Judge John Gleeson as an amicus curiae (friend of the court) “to present arguments in opposition to the government’s Motion to Dismiss,” as well as to “address” whether the court should make the defense explain why “Flynn should not be held in criminal contempt for perjury.”

Flynn’s lawyers, led by former federal prosecutor Sidney Powell, filed a petition on May 19 for a writ of mandamus—a request to the higher court to order Sullivan to accept the case dismissal, cancel the Gleeson appointment, and assign the case to another judge.

The appeals court gave Sullivan 10 days to respond, upon which he hired highly-connected Washington attorney Beth Wilkinson to do so for him.

Wilkinson has argued that the DOJ motion to dismiss is so unusual, the judge needs more information to evaluate it.

Her argument, however, doesn’t address the substance of the documents the DOJ cited as a reason for dismissing the case.

The documents show that top FBI officials intervened to keep the Flynn investigation open, despite the fact that the Washington field office already proceeded to close it. The probe was supposed to determine whether Flynn was cooperating with Russia on something illegal or threatening national security. It not only found no evidence of that, but uncovered no actual “derogatory” information on Flynn, a decorated military intelligence veteran. FBI top brass kept the case open on a legal theory that Flynn could have trespassed on a virtually never-enforced and never successfully prosecuted 18th-century law called the Logan Act, despite the fact that the DOJ made clear to them that such charges wouldn’t fly.

The documents were revealed by Jeffrey Jensen, U.S. attorney for the Eastern District of Missouri, who was directed in January by Attorney General William Barr to perform a review of the case.

Upon the discovery, Jensen recommended dismissing the case. The DOJ stated it could no longer prove beyond reasonable doubt that what Flynn said during the interview was material to a properly predicated investigation.

Flynn and the DOJ have told the appeals court that Sullivan doesn’t have the authority to delay accepting the dismissal in this case.

“Because this case involves ‘the prosecution’s constitutionally rooted exercise of charging discretion,’ it is a ‘usurpation of judicial power’ to second-guess it,’” the DOJ told the court.

Update: The article’s headline has been updated for clarity.