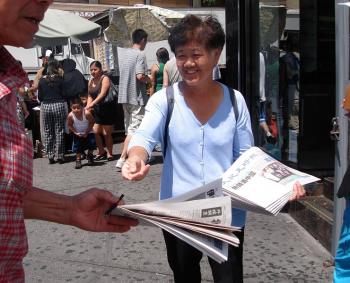 Flushing Residents Speak Out Against Attacks

In the past two-and-half months, residents of Flushing, New York City have lost their peace. Since May 17, hundreds of pro-communist Chinese mobsters have gathered to verbally and physically assault Falun Gong practitioners who were holding permitted rallies or passing out literature in the streets to call for attention to China’s nine-year persecution of Falun Gong. These mobsters have injured several Falun Gong practitioners despite the police having increased manpower to protect practitioners.

With the loud mobsters around, the majority of local residents, largely Chinese, seem to have passed the media’s attention. Many did remain silent to avoid trouble in the early stage, but more and more Flushing residents have stepped out to make their voices heard.

When the attacks first started, most residents were stunned by the violence that the mob displayed. Yuan, a Chinese woman who came to the United States 17 years ago from Shanghai, said she was shocked to find a mob shouting anti-Falun Gong slogans in front of the Flushing Library on May 17. “On one side (of the street) was the mob screaming ‘terminate Falun Gong’ at the top of their lungs. On the other side were Falun Gong practitioners quietly standing there with poster boards in their hands,” Yuan said, recalling the scene she witnessed on her way back home that day. “My first thought was, ‘The Cultural Revolution is back.’”

Yuan tried to persuade the mobsters to stop cursing and throwing things at the practitioners, but some mobsters came at her before she could finish her sentence. “They cursed me loudly, and broke my umbrella,” Yuan said. “They were crazy.”

Residents who are not Falun Gong practitioner have also fallen victim to the mob attacks. Xiao, a male resident in Flushing, said he was cornered by mobsters on May 18. “I saw the mobsters tearing Falun Gong practitioners’ display boards into pieces,” he said. “I took pictures of the mobsters, but several mobsters surrounded me, and threatened they would follow me and find out who I was.” Xiao said he felt sad that such “red terrorism” could actually happen in the United States.

Shi, a 74-year-old Taiwan immigrant who moved to the United States 21 years ago, said a Chinese spy accosted him in a supermarket in Flushing and offered to pay him for assaulting Falun Gong. “He said he was looking for people to publicly insult Falun Gong practitioners, and would pay $10 for every two hours,” Shi said. “He told me to target female practitioners. I refused, because I think people should not follow the Chinese Communist Party (CCP) and do such terrible things for money.”

Though mobsters claimed they were ordinary residents who protested Falun Gong out of their own will, local residents said they could not believe them. “There is no denying the fact that most of them did this (assault) for money,” said David, a company clerk who came to the United States from Hong Kong some 20 years ago. “The mobsters know it’s true, and Flushing residents know it, too.”

Multiple sources of evidence have confirmed these allegations, among which was a recorded confession of Chinese Consul General Peng Keyu in which he eagerly admitted to inspiring the mob attacks. “At first I thought it was Falun Gong’s fault,” said Huang, an interior decorator living in Flushing. “But then I heard Peng Keyu’s recorded confession. I realized (the Flushing incident) was a big intrigue planned by the CCP.”

Many people did not dare to publicly support Falun Gong though, especially those who have families or business in China, because the CCP has arranged many spies in Flushing, residents said. “Chinese people in Flushing are all very careful with what they say, especially when speaking with strangers,” David said. “You can chat with people, but don’t talk about politics. If you criticize the CCP, you may have trouble, because other people may report you.”

But after seeing what has happened in Flushing, more and more of the “silent majority” have spoken out for justice. Many protected Falun Gong practitioners from mobsters’ attacks and accused mobsters in public. Many openly expressed their support and encouraged other witnesses to stand up and tell the truth. Some offered to donate money to help more people hear the truth about the persecution. Others provided clues about the assailants and exposed the identity of some mobsters ranging from illegal immigrants, CCP spies to current staff members of China’s public security agencies. “I noticed that more people are not blindly following the CCP any more,” said Li Jianwei, an architect living in Flushing. “All people of conscience will stand up against the persecution. I’m very optimistic about this.”

Hu Ping, a Flushing businessman and a Christian, said he admired Falun Gong’s spirit. “In China, other religious groups persecuted by the CCP have fallen into disarray, because they lack Falun Gong’s perseverance and courage,” Hu said. “Only Falun Gong gets stronger and stronger. They just follow their belief in truthfulness, compassion, and tolerance. Their spirit represents the true character of Chinese people.”

Hu also criticized the U.S. government for allowing such terrorism to happen, saying that the government failed to take effective actions because they feared to displease Chinese authorities.

Residents called for the U.S. government’s attention to the mob attacks, and expressed their concerns that their safety and freedom will be undermined by the CCP’s infiltration. “What we want to say is: don’t allow the CCP to extend its tyranny to democratic countries like the United States,” Yuan said.