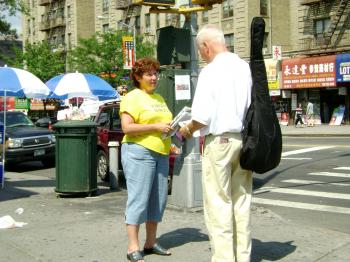 SPEAKING OUT: Maria Vassong speaks to passersby about false claims being made in propaganda being distributed in Flushing, Queens by pro Chinese Communist groups. (The Epoch Times)
US

Joshua Philipp
Joshua Philipp is an award-winning investigative reporter with The Epoch Times and host of EpochTV's "Crossroads" program. He is a recognized expert on unrestricted warfare, asymmetrical hybrid warfare, subversion, and historical perspectives on today’s issues. His 10-plus years of research and investigations on the Chinese Communist Party, subversion, and related topics give him unique insight into the global threat and political landscape.
View profile
Follow
biggersmaller
Print
FLUSHING, New York City—Proudly donning her bright-yellow Falun Dafa T-shirt, Marina Vassong continued to tell people about the persecution of Falun Dafa, despite harsh words from a nearby table that distributes hate propaganda against the practice.

Following a string of attacks against Falun Dafa (Falun Gong) practitioners in Flushing over the past couple months; a group along Main Street recently set up a table that distributes hate propaganda against the meditation practice. The group who set up the table consists, in part, of those who had previously been arrested for or were allegedly involved in the attacks against Falun Gong practitioners.

Vassong mentioned that although she has received hateful words from those who work at the table distributing the hate propaganda, she continues to stand nearby the table so as to help inform people what Falun Gong is about. “In the morning they were screaming at me and doing all kinds of things and I just didn’t pay attention,” Vassong said. “I’m against this [table] and I’m peacefully trying to explain to people why I’m against it.”

Falun Dafa, a Chinese meditation practice based on the principles of Truthfulness, Compassion, and Tolerance, has been the target of persecution and defamatory propaganda by the Chinese Communist Party (CCP) since 1999. The persecution was launched shortly after a government poll found that between 70 and 100 million Chinese had taken up the meditation practice.

“When you live under a communist regime, you have to believe only in communism,” said Vassong. “Then, of course, if you believe in Truthfulness, Compassion, and Tolerance, it’s nonsense to them. They don’t understand it. This is one of the main reasons why the persecution is happening.”

The booth set up in Flushing echoes similar propaganda spread by the communist regime in China. Vassong mentioned that she was appalled when she found out that such a booth was allowed to be set up on U.S. soil. “I think it’s unbelievable,” Vassong said. “I’m really upset over how this table is standing there in this free country. I don’t know who gave them permission to say bad things about Truthfulness, Compassion, and Tolerance.”

Paying little attention to words from those who work at the table, aside from discussing with passersby about what Falun Gong is about, Vassong also hands out copies of the Chinese Epoch Times. The Chinese edition of the Epoch Times is recognized as the “free media” of the Chinese community as it is one of the few Chinese newspapers that is not controlled or influenced by the Chinese Communist Party (CCP).

Having emigrated from Russia to her current home in Philadelphia 15 years ago, Vassong said that she knows what it’s like to grow up under a communist regime. She mentioned that she understands that many people have been misled by false information spread by the communist party in China. “It’s always going to be like this, just like it was in Russia,” said Vassong. “For us who came from somewhere that knows this regime, who were under a communist regime, it’s very clear that they’re liars.”

“I grew up in Russia, unfortunately, under the communist environment, so I know it very well,” said Vassong. “This is the reason I came here: to tell people the truth.”

Attempts to interview those at the propaganda table were unsuccessful as those who there refused to speak with reporters.