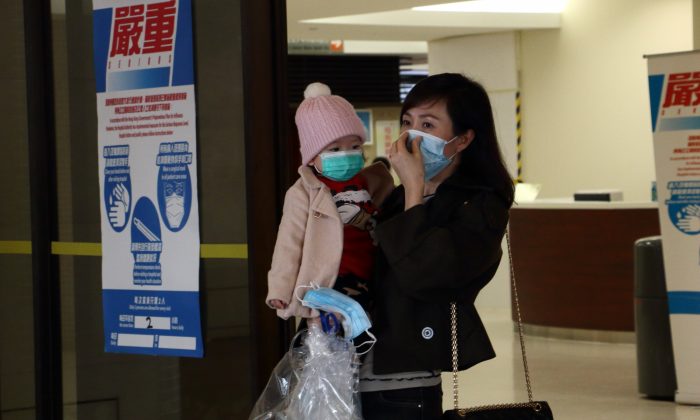 A woman holds a child while putting on a mask at Queen Mary Hospital on Feb. 5. (Kiri Choi/Epoch Times)
China

HONG KONG—During Hong Kong’s current flu outbreak, 198 influenza patients have been taken to intensive care and 157 of them have died as of Feb. 10, according to data from Hong Kong’s Centre for Health Protection.

185 of the patients were confirmed to have the influenza A (H3N2) virus. By midday on February 5, there were eleven new severe cases and eight deaths within 24 hours.

The flu outbreak has struck over one hundred schools in Hong Kong. The authorities have issued flu prevention guidelines requiring schools to measure students’ temperature every day before class and distribute masks to students.

The Department of Education has advised that the Health Protection Centre will recommend whether school should be closed depending on the prevailing situation.

Professor Yuen Kwok-yung from Hong Kong University’s Department of Microbiology held a press conference on Feb. 5 detailing the features of the H3N2 virus and the current situation of the outbreak.

Yuen emphasized that this year’s flu situation is severe but not “particularly serious.” According to previous years’ records, there were over 800 deaths in 2004 and over 1,000 deaths in 2005.

“In the past few years, over eighty percent of the flu deaths in Hong Kong are the H3N2 type,” Yuen said.

He explained that the high mortality rate of H3N2 is mainly due to antigenic drift of the virus. Among the death cases, he said, 99.8 percent had high risk factors such as being over 65 years old, under 6 years old, pregnant, obese, or with a chronic health problem.

Yuen urged people not to panic. He believes that as long as people pay attention to personal hygiene, the government temporarily does not need to implement additional procedures.

He said the current flu epidemic cannot be compared to the 2002 outbreak of severe acute respiratory syndrome (SARS) in China.

“One group is of people 70 to 80 years old, and the other was 30 to 40 years old. Many people aged 30 and 40 got sick with SARS, including many staff members. They were very young,” Yuen said. “How can these two groups of people be compared?”

However, he said they have to be careful. If over one percent of the deaths are from non-high-risk patients, then the government needs to consider other measures.

“The vaccine selected by the World Health Organization failed to work against H3N2,” Yuen said. He said the vaccine was only 20 percent effective.

Even if one is vaccinated before the flu season, it does not mean the body can produce the corresponding antibodies against the influenza virus, according to Yuen. He believes the public should be vaccinated, but should not expect great results.

Given the current epidemic, he suggested that high-risk people should avoid crowded places, wear masks when going out, and take off masks and immediately wash their hands after coming home.

Those sick with the flu should seek medical treatment as soon as possible, as the medicine still works within 48 hours and will reduce the chance of complications and death, he said.

He warned that a second wave of influenza would come “in July or August this year, or December this year. The most severe time will be next January or February. It is hard to estimate how the situation will be.”

Professor Yuen said that Queen Mary Hospital recently received a number of severe flu patients who did not have any chronic health problems, which means the virus could make young people seriously ill.

One 38-year-old patient had flu symptoms for three days and then had difficulty breathing, so he was admitted to the hospital.

The patient’s lungs looked like frosted glass, Yuen said. Fortunately he was young, and he gradually recovered after taking Tamiflu.

A 56-year-old man did not have any ill symptoms until he became dizzy and bumped into a wall. He was hospitalized, but did not have a fever.

The patient’s heart rate was very high, which worried the emergency doctors. A further checkup indicated that the influenza virus had entered the endocardium and caused dizziness.

Professor Yuen said the man did not suffer from pneumonia, which meant the flu might not cause fever.

Secretary for Food and Health Go Wing-man said flu vaccines for the current variant will be put into mass production in March or April at the earliest.

The previous outbreaks of bird flu and SARS all happened in China and Hong Kong. For the current outbreak, Yuen is concerned that Hong Kong might not be able to get the vaccines in time.

“Where can we find the vaccine? Even those in the Southern Hemisphere say the earliest time to get the vaccine will be April,” Yuen said.

“Suddenly we are seeing antigenic drift. Other countries will try hard to get the vaccines,” he added. “Our Secretary is working hard, but I do not know if he can get the vaccines. I doubt he will.”

Professor Yuen recommended that Hong Kong develop its pharmaceutical base to produce vaccines and virus test agents in order to prevent SARS, H10N8, and other severe epidemic outbreaks.