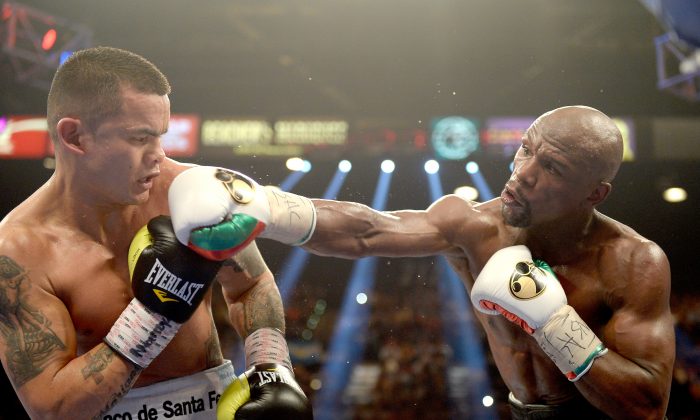 Floyd Mayweather vs Manny Pacquiao 2015? Fight Getting Closer to Reality as Obstacles Fade

Is Manny Pacquiao vs Floyd Mayweather finally going to happen?

Mayweather seems to have possibly hinted at the fight before, saying that he has “a big surprise” for his fight in May 2015.

Now a source has told Boxing Insider that Floyd Mayweather Sr. has told the source that Team Mayweather wants to fight Pacquiao in May, and that those plans are the “big surprise” that his son was talking about.

“Just the fact that the father is pushing for the fight is significant, but the source said that since then he’s seen other indications that the rest of the team is on board,” the blog said.

Boxing fans and promoters have long wanted to see Mayweather and Pacquiao, arguably the most famous boxers still fighting, go at each other. There was a proposed match in 2010 but negotiations broke down, despite the rumored fight being projected as the highest grossing fight in history.

Or, Arum said, the fight could happen in 2016 with Mayweather returning to HBO after his contract with Showtime expires.

The Boxing Insider source believes that Showtime is on board.

“I know Showtime will push for this fight,” said the source. “Where else can they get 2 million [pay-per-view] buys? Floyd is at a different level. He’s fighting for history.”

And other obstacles are moving out of the way, such as Richard Schaeger exiting as Golden Boy Promotions CEO. He was a major obstacle to the potential fight.

Mayweather Jr. is 46-0 and needs three more wins to tie the record 49-0, set by Rocky Marciano.

Mayweather Sr. believes that once his son ties Marciano’s record, he’ll have the long-awaited bout against Pacquiao.

“I think he (Floyd) has to be 50-0 to surpass Marciano. They got three more fights, I’m more than sure that if Floyd gets to the 49, I’m pretty sure they’ll come up with that [Pacquiao] fight,” he said. “If we fight Pacquiao, that would be last anyways. That would be the fight that’s going away, and that fight would probably be the biggest fight in the world. If Floyd fights Pacquiao, believe me, it’s gonna be the best for last.”

But neither boxer has decided on their opponents for next year, when each will likely fight twice.