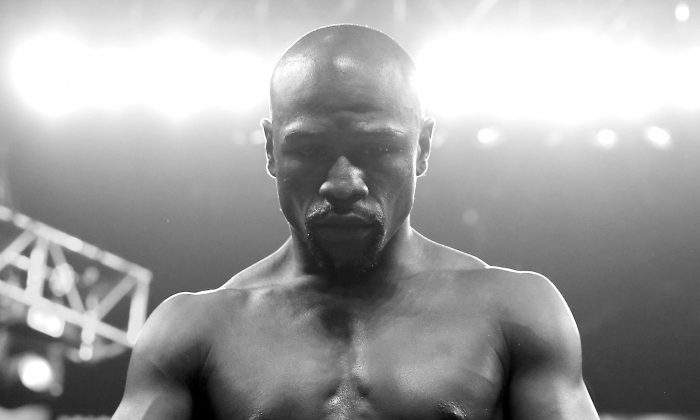 Boxing superstar Floyd Mayweather Jr. retired with a career record of 49-0. (Al Bello/Getty Images)
Other US

Boxing superstar Floyd Mayweather may have announced his retirement last September after defeating Andre Berto via unanimous decision to move his record to 49–0, but there are more and more signs pointing to a return to the ring for the 39-year-old fighter. Although no bout has been set up yet, it appears that Mayweather is already planning for the possibility of one.

A company owned by Mayweather filed for patents to “TMT 50” and “TBE 50,” which may stand for “The Money Team” and “The Best Ever,” ESPN reports. Mayweather’s next fight would be his 50th.

Is Floyd Mayweather Ready To Step Back In The Ring Again??? https://t.co/Leh8jPEGfi

Over the weekend, Mayweather was interviewed by Showtime’s Jim Gray and he didn’t sound like someone who was done with the sport.

“As of right now, you know, some crazy numbers have been thrown my way, upwards of, of course, nine figures,” said Mayweather. “I’m truly blessed, way beyond belief. I don’t know what we’re going to do, but right now, I’m happy being on this side helping fighters.”

Floyd Mayweather is being offered ‘crazy numbers’ as signs point to a return to the ring https://t.co/ftRz4UWPlg pic.twitter.com/Xqidpi5aIm

Those hoping for a Mayweather/Pacquiao encore may be disappointed, though, as Gray didn’t ask about the possibility of fighting the Filipino boxer whose bout with Mayweather in May of 2015 ended up being far and away the biggest purse in the history of the sport.