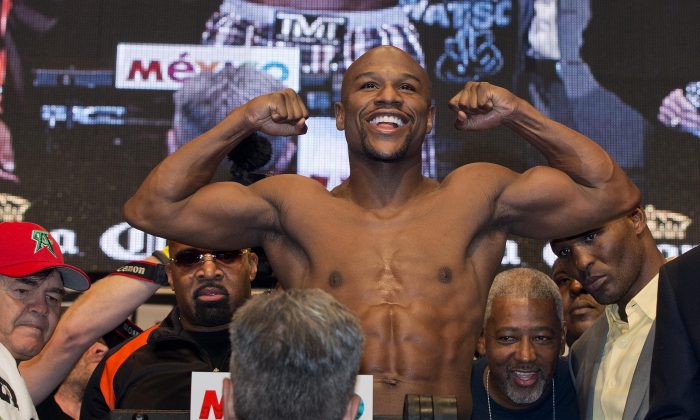 Floyd Mayweather Jr. Doesn’t Respond After Ronda Rousey Claims She Could Beat Him

Floyd Mayweather Jr. hasn’t responded to Rounda Rousey after she claimed that she could beat him in a fight.

Rousey, the current women’s champion in the UFC, said that she could put an end to Mayweather’s unbeaten streak.

She divulged her gameplan in an interview on Power 106FM this week.

“I would drop down to the ground and crawl over to him as fast as I can,” Rousey said. “I wouldn’t even stand up, I wouldn’t be near him. I would just do a little army crawl over there and he would have to run away.

“I would just be skittering after him like the one dude in ‘Bloodsport’ that was doing the whole monkey crawl fight system. I would do that. I would just bear crawl over there, too low for him to hit me, and tackle him down. I spent a lot of time on the ground, and I doubt that he does.”

Rousey fights right now at 135 pounds while Mayweather weighed in at 152 pounds during his last fight.

Rousey herself is on a long streak of wins, including over Liz Carmouche in a fight in late February.