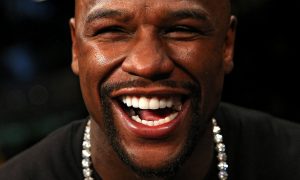 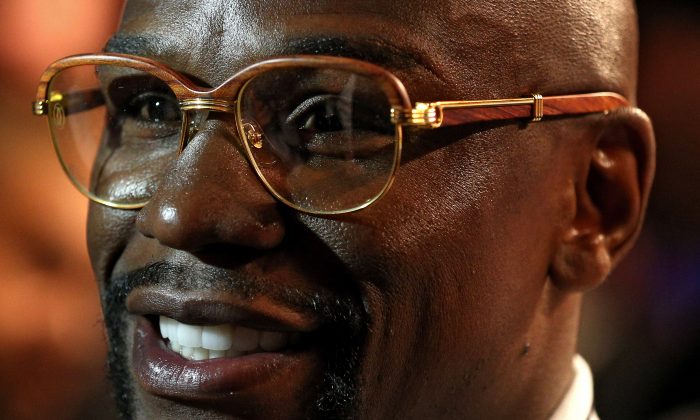 Floyd Mayweather looks on between boxing matches at the DC Armory on April 30, 2016 in Washington, DC. (Photo by Patrick Smith/Getty Images)
Other US

Floyd Mayweather, Jr.: Boxer Hints Coming out of Retirement Is a Possibility

Boxing champion Floyd Mayweather, 39, announced his retirement after beating Andre Berto by unanimous decision last September, but Mayweather hinted that a return to the ring isn’t out of the realm of possibility when interviewed Saturday by Showtime’s Jim Gray.

“As of right now, you know, some crazy numbers have been thrown my way, upwards of, of course, nine figures,” said the 49–0 Mayweather, who has become a boxing promoter. “I’m truly blessed, way beyond belief. I don’t know what we’re going to do, but right now, I’m happy being on this side helping fighters.”

The question then becomes who Mayweather would fight. He quickly ruled out fighting Gennady “GGG” Golovkin and suggesting it’d be best if Golovkin take on Andre Ward. “How can Floyd Mayweather fight at 160 and I could never make 154?”

Though a rematch with Manny Pacquiao—who Mayweather beat last May in far and away the biggest boxing purse ever—was never discussed, it’s not outside the criteria that Mayweather laid out at the end of the interview that would lure him back in the ring.

Floyd Mayweather says he’s happily retired but “I’ve been talking with CBS and Showtime and you just never know.” https://t.co/RdIr8GXCs0

Floyd Mayweather: Former Boxer Shares Photo of Himself at Louvre Pyramid on Trip to Paris