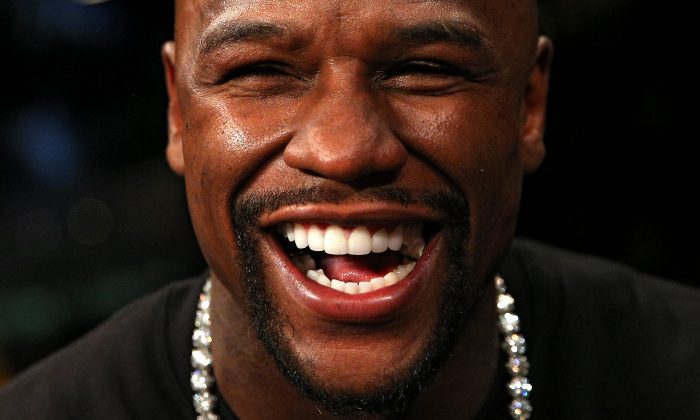 Floyd Mayweather (49–0) has been retired since September of 2015. (Patrick Smith/Getty Images)
Other US

Floyd Mayweather: Former Boxer Shares Photo of Himself at Louvre Pyramid on Trip to Paris

Former boxing champion Floyd Mayweather Jr., who retired in September of 2015 after beating Andre Burto to move his record to 49–0, posted a photo of himself at the Louvre Pyramid to Instagram, Twitter and Facebook.

Paris is one stop on a trip he is taking around the world with his 15-year-old daughter, Iyanna.

In Paris, France at The Louvre Pyramid. www.themoneyteam.com

The 39-year-old Mayweather also posted another photo of himself and his daughter with the Eiffel Tower in the background.

My daughter @moneyyaya & I are traveling the world on #AirMayweather. We went to the top of the Eiffel Tower today. After that, we posed for a daddy daughter photo. www.themoneyteam.com

And finally, Mayweather also posted a video of the inside of his 14-passenger jet—something he could probably afford even before his nine-digit payday last May when he beat Manny Pacquaio.

Come inside my lavish life and see how I live. This is my 14 passenger jet as you can see in the video. Only 10 seats are being seen because the bed transforms into 4 seats. While I do the filming, you can see there is a passenger on the right which is my cousin @stacymayweather.

Will Mayweather fight again? Although he’s said he’s retired, that’s a fickle thing in boxing. Many great boxers who have retired over the years have later returned, drawn by the allure of another big fight—and the big purse that comes with it.

The only conceivable fight that may interest Mayweather is a rematch with Pacquiao. Of course, the 37-year-old Pacquiao is retired himself. The clock is certainly ticking for both of them if they’d like to do another mega-bout—something most of us would like to see.