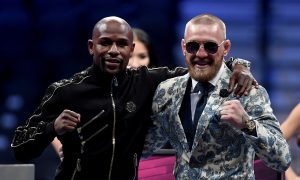 How Much Mayweather, McGregor Stand to Earn from Epic Fight
0 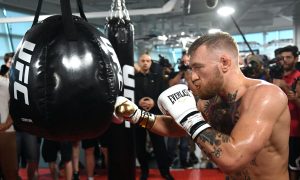 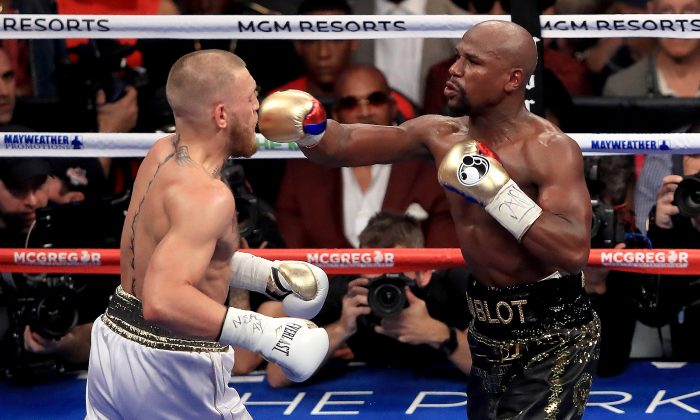 As a boxer, he was undefeated—finishing his career at 49–0—matching the record of the legendary Rocky Marciano.

He fought for eleven years, retired, and came back two years later for another go—again, retiring undefeated. ESPN named him the best boxer, pound for pound, of the last quarter-century.

He was also one of the greatest all-time earners.

In 2017, after two years out of the ring, the champion boxer returned for what was primarily a massive payday, facing mixed martial arts (MMA) star Conor McGregor in a fight at T-Mobile Arena in Las Vegas on Aug. 26, 2017.

Mayweather won, surpassing Rocky Marciano’s record, and according to Mayweather, earning another $300 million. Mayweather, at age 40, said then that that would be the final fight of his lengthy career.

But for Mayweather, even all that has not proved to be enough.

Mayweather to the UFC?

“We’re talking to Floyd about doing a UFC deal,” Dana White told ESPN. “It’s real. He was talking about [boxing] Conor McGregor. Was that real? Have you heard Floyd talk about many things that aren’t real? He usually tips his hand when he’s in the media, and then that … ends up happening.

“We’re interested in doing something with Floyd. Everything is a realistic possibility,” White continued. “Anything is possible.”

Dana White is certainly enough of a businessman and a showman to understand the draw that a Floyd Mayweather MMA fight would be.

MMA fans would want to see their favorites have a go at the world’s best boxer—even if he is well past his prime. Mayweather fans would want to watch their hero showcase his striking skills, and prove that he is an able athlete across multiple disciplines.

Of course, nothing would be really proved. Mayweather could not possibly learn sufficient wrestling and jiu-jitsu skills to match the more serious MMA fighters. However, if his opponents were carefully chosen, he could make a bundle of money.

And of course, Dana White would make a bundle of money as well.

How big a bundle?

“They just called me not too long ago and asked me to come back,” said Mayweather in an interview with Fight Hype.

Before the Mayweather/McGregor boxing match, Mayweather hinted that he might cross over to MMA to beat the MMA lightweight champ on his own turf.

That fight would certainly be lucrative for all concerned. More than four million people in the United States alone paid $100 to watch the Mayweather/McGregor fight on pay-per-view. The bout generated more than $600 million in revenue, with 6.5 million pay-per-view customers worldwide, according to the Showtime network.

The rematch would be problematic. McGregor didn’t have the skill or the stamina to go 12 rounds with Mayweather in a boxing ring, and despite the very real dangers of boxing, neither was likely to face a career-ending injury.

MMA, however, is many times more complex, with grappling and striking, and there is a much higher chance of serious injury—after all, many of the best submission holds are designed to stress limbs to breaking point, forcing competitors to quit or be crippled.

McGregor, with years of training in MMA techniques and tactics, would have a huge advantage.

The fight could happen, but if it did, it would certainly be the final fight of the contract. And whether or not that fight would still generate huge income would depend on how well Mayweather fared in his first few MMA fights.

Could even a star as big as Floyd Mayweather generate that kind of income—enough to justify the UFC signing a billion-dollar, four-fight deal?

While Mayweather might have been the world’s best pound-for-pound boxer, he is 40 and would likely be at least 42 before the four-fight series ended. That is old in any sport, particularly in high-contact sports.

As the body ages and the speed drops, the damage increases in an ugly downward spiral. Conor McGregor proved that he could hold his own against Mayweather in the first several rounds of their boxing match. Add into that leg kicks, judo throws, and joint-snapping jiu-jitsu holds, and it seems unlikely that Mayweather could last.

On top of that, MMA rounds are five minutes, as opposed to three in boxing. Mayweather would have to train to go longer and harder for each round.

No one would be too surprised if Mayweather’s first fight was against a weaker opponent—say, an even older fighter who had been something of a name, but had faded, and returned just for a payday.

Likely the UFC would be careful to sign a striking specialist as Mayweather’s first opponent, but no MMA fighter would try to go toe-to-toe with Mayweather when grappling and ground-and-pound were available options.

Mayweather’s next opponent couldn’t be too good either—maybe an up-and-coming fighter without much experience but a lot of energy.

Mayweather’s second opponent could be just some hack, though. If he was too weak, fans would get disgruntled, and revenue would fall.

Late in a fight, when fatigue clouds the brain, the body falls back on what it knows best—and at that point, Mayweather wouldn’t have a history of wrestling or jiu-jitsu to recall.

The question would be, how big a payday could Dana White or Floyd Mayweather reasonably expect from a match between a returning retiree and Mayweather—himself twice a returned retiree? And how much from the next match, if the first was fairly lackluster, with Mayweather spending most of the fight ducking and trying to avoid takedown while looking for a chance to land a big punch?

Would Mayweather understand that likely, he would need to be defeated in his third fight?

Would he accept that in order to really capitalize, Dana White would have to match Mayweather against someone who would really excite MMA fans—and that those fans, having seen the first two fights, would be tuning in to watch a real MMA star do to Mayweather what Mayweather did to Conor McGregor?

And after that—how big a final payday could Floyd Mayweather hope to generate? Outclassed, defeated, beat up. Could even a Mayweather/McGregor really excite fans like the first meeting did?

This is certain: Dana White and Mayweather, and the people who advise him, know a lot about the money side of combat sports. A billion is great pre-deal hype, but it is likely that some deal could be signed, for some sum of money, simply because Floyd Mayweather is well aware that in a few short years, he really won’t have anything left to sell.