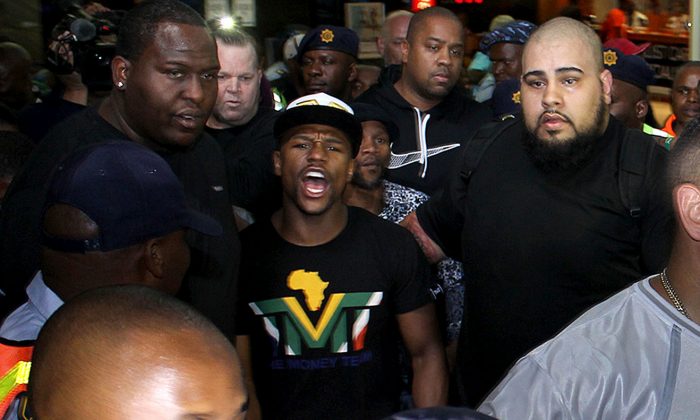 Boxer Floyd Mayweather Jr, center, on his arrival in Johannesburg Wednesday Jan 15, 2014. Mayweather Jr. is in the country for a six-day visit that the government hopes will help "resuscitate" boxing in the country. (AP Photo)
Entertainment

Floyd Mayweather Jr. was not arrested for the alleged orchestration of a murder and kidnapping, but a fake news website is saying otherwise.

Huzlers.com–which describes itself as “satire”–published the article, and it included a photo of Mayweather taken in 2012 when he was jailed for domestic battery.

Huzlers even goes so far as to cite “TMZ Sports,” but that’s also fake. “Huzlers was informed that early March 13th Floyd Mayweather was arrested from his home and is being charged for attempted murder and kidnapping,” the Huzlers article reads, and it says that users should tweet “#freeFloyd.” It appears that Huzlers merely copied the TMZ report word-for-word and added the bit about Mayweather being arrested at the end, which isn’t true.

On the bottom of each page, Huzlers has a disclaimer that reads: “Huzlers.com is a combination of real shocking news and satire news to keep its visitors in a state of disbelief.”

The vast majority of the articlees  published on the site are fake. One of the top “stories” published on the website is a post about the “Wild Hogfish,” which is a long-running Internet hoax.

However, TMZ is reporting that Mayweather, the current No. 1 Pound-for-Pound boxer, is being accused of orchestrating the beatings of two men who allegedly stole jewelry from one of his Las Vegas homes. The men apparently suffered broken arms and legs in the incident.

“We’re told the men are adamant they never took anything from Floyd and it appears Floyd realizes that now.  But here’s the problem for the champ — sources familiar with the situation say the attack amounts to attempted murder, mayhem and kidnapping.  We’re told the men have retained a lawyer,” the TMZ report reads.

Again, Mayweather hasn’t been arrested on any charges.

Another TMZ report on Friday says that Mayweather was “present during the attack,” but it is not clear if he was involved in the beatings, according to the two accusers.

TMZ said the alleged victims have injuries, including a broken right pinkie, swelling of the left hand, a broken left ulna, a cracked right ulna, and multiple fractures in the left had that requires pins to reset the bones. One of the men had to get a titanium plate in their arm so that the bone would reset, according to TMZ.

Mayweather is slated to fight Marcos Maidana in a few months. He recently tweeted that his fight–which will be in Las Vegas–sold out in 10 minutes.

Mayweather also tweeted photos and videos of him training for the bout.