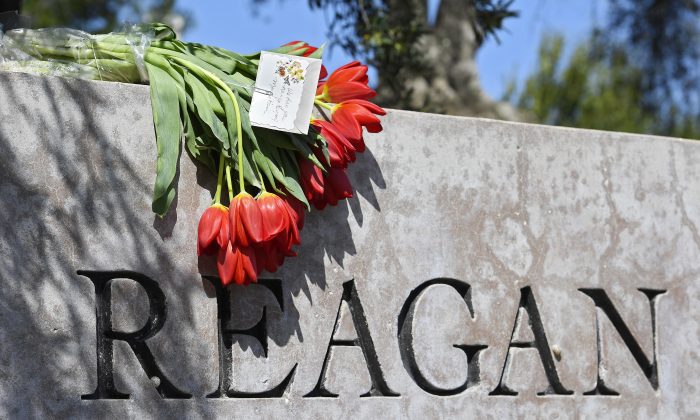 Flowers sit atop the sign at the entrance to the Ronald Reagan Presidential Library in Simi Valley, Calif., on March 6, 2016. (AP Photo/Mark J. Terrill)
US

Jonathan and Renee Kritzer and their four young children toted small American flags as they looked out over the manicured hilltop property in Simi Valley.

“I had tears in my eyes when I heard she died,” said Kritzer, who said he turned 18 just in time to vote for Ronald Reagan when he ran for a second term in 1984. “We try to teach our children to be humble, to care about others, to be humanitarians. That was Nancy Reagan.”

Mrs. Reagan, her husband’s closest adviser and fierce protector, died Sunday morning at her home in the Bel-Air section of Los Angeles of congestive heart failure. She was 94.

Officials decided to shut the library and museum—usually open seven days a week—and postpone the Sunday opening of an exhibition of historical and religious objects from the Vatican.

Flowers and notes of remembrance were left near the main entrance. Flags on the grounds were expected to be lowered to half-staff.

Sharon Hirtzer and her husband, Joe, were visiting California from Chicago and had planned a trip to the library before learning of Mrs. Reagan’s death.

“I was just really sad,” said Sharon Hirtzer, as a small crowd of well-wishers gathered near the front gate. “She was a great lady and had so much class.”

Hirtzer said Mrs. Reagan, often resplendent in designer dresses, brought glamour to the White House. Though the First Lady was occasionally criticized for her spending habits, Hirtzer said that never bothered her.

“She was always very elegant,” said Mark Schnose, who made the trip with his wife Barbara from San Bernardino County. “She wanted to portray the US in a positive light to foreign dignitaries.”

But Schnose, a psychologist, said he’ll remember most Mrs. Reagan’s outspoken support for Alzheimer’s awareness when the former president was diagnosed with the disease after leaving office. She “set a model for how we love and care for” those with Alzheimer’s, he said.

Schnose was among several mourners who pointed out the former first lady’s advocacy for causes near to her heart—especially the “Just Say No” anti-drug campaign, but also foster grandparenting, breast cancer awareness, stem cell research and background checks for gun owners.

Others remarked about the Reagans’ mutual devotion over 52 years of marriage.

Wendy Armstrong, a docent at the Reagan Library, said she used to love seeing the Reagans hold hands.

“Their love story was like none other,” she said.