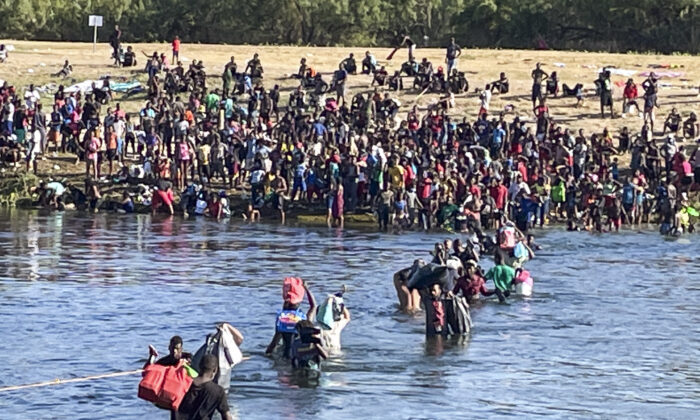 Illegal immigrants cross the Rio Grande between Del Rio (far side) and Acuña, Mexico. Some are crossing back to Mexico to avoid deportation from the United States, in Acuña, Mexico, Sept. 20, 2021. (Charlotte Cuthbertson/The Epoch Times)
Florida

While the Biden administration has imposed a vaccine mandate on American citizens, thousands of illegal immigrants are being released into the population with no vaccination requirements. Meanwhile, the number of violent crimes are escalating in areas where illegal immigrants are settling. Some call it “extremely frustrating.” Others call it “sheer stupidity.”

Mindy Hodge of Clermont in Lake County, Florida, has been following the numbers on illegal immigration in her area. Her interest in tracking the statistics began when her father-in-law was injured in a car accident in Lake Worth when his car was struck by a vehicle being driven by an illegal immigrant. The individual who struck her father-in-law’s vehicle had no driver’s license and no insurance, leaving her father-in-law responsible for replacing his totaled vehicle and paying his own medical bills with provisions from his own insurance policy.

“I was really offended by that,” Hodge told The Epoch Times, adding that the incident inspired her to reach out to a friend who was a retired police officer, who told her “this happens all the time.”

“They get in car accidents, they severely injure people, they kill people,” Hodge said her friend told her regarding his experience in law enforcement. “Then they are told to appear in court for reckless driving, driving without a license, vehicular homicide, and then they just leave and go back to Mexico or Central America and there’s never any accountability.”

Hodge then began conducting her own research, logging on to her local sheriff’s office website to find statistics for her own county.

“I started taking the time frame from Friday to Sunday each week,” Hodge said, explaining that what she saw happening regularly was that 10 to 15 percent of the people that were arrested in her county every weekend were here illegally.

“That’s one of the things our county has on its website—their citizenship status,” Hodge said.

“We’re not a huge county, like Orange or Miami-Dade, but we’re a good-sized county and it just shocked me that 10 to 15 percent of our police resources were being used to deal with people who were here illegally, often being arrested multiple times,” Hodge said. “As a citizen, I used to think that if you were here illegally, or even on a worker visa, if you were caught committing a crime you were sent back. I found out very quickly that’s not the case at all and it’s extremely frustrating for law enforcement.”

Hodge said with regard to the number of arrests of illegal immigrants since the beginning of this year’s border crisis, it isn’t the numbers so much as the severity of the crimes that have increased.

“It used to be they were always picked up for DUI (driving under the influence) or driving without a license,” Hodge said. “Now we’re seeing a lot of aggravated assaults and a lot of domestic violence.”

The surprising aspect for Hodge has been the growing number of women being arrested for increasingly violent offenses.

“Females engaged in domestic violence, females involved in aggravated assault,” Hodge shared. “The crimes are becoming more serious than just driving without a license or getting drunk at a bar and driving. They are becoming more violent.”

“With this latest group of Haitians, a large amount of them were sent to Orlando,” Hodge said. “Lake County is right next to  Orange County, so we’re like 20 minutes from Orlando, and I find it very interesting that the White House says we have this huge COVID problem in Florida—and that [Gov.] Ron DeSantis is killing people and they’re calling him ‘DeathSantis,’ and Jen Psaki, the press secretary, is saying DeSantis isn’t protecting Floridians—yet they did not test any of these people. They did not make them get vaccinated and then they sent them into Orlando, the place they say is so dangerous.”

According to Florida Rep. Anthony Sabatini (District 32), the move to settle large numbers of illegal immigrants in red states is “all by design.”

“They’re bringing in as many illegal immigrants as they can so they can grow their voter rolls,” Sabatini told The Epoch Times, adding that they are doing this “so they can get more Democrats” and “more malleable individuals who will do whatever the woke corporations want them to do.”

Asked about the apparent contradiction of the Biden administration imposing vaccine mandates upon American citizens while allowing thousands of unvaccinated illegal immigrants to filter unchecked into the American population, Sabatini said “they don’t actually care about COVID.”

According to Sabatini, officials in Florida asked border patrol last month how many of the estimated 180,000 illegal immigrants that are pouring into the country each month wound up in the Sunshine State.

Asked how many of these estimated 50,000 illegal immigrants per month have criminal records or are known gang members, Sabatini said “a large amount” of them fall into that category. “The truth is, just coming over makes them criminals. It’s a crime to cross the border illegally so they’re all criminals in that sense.”

In response to the influx, Florida’s attorney general filed a lawsuit against the Biden administration for ignoring federal immigration laws and DeSantis issued an executive order (pdf) prohibiting state agencies from assisting in the illegal resettling of illegal immigrants in the Sunshine State.

“The fact that the Biden administration is putting mandates on U.S. citizens and not putting the same mandate on illegal immigrants is further proof that the decisions of his administration are more about politics and less about keeping Americans safe during a pandemic,” Florida Rep. Blaise Ingoglia (District 35) told The Epoch Times. “Almost every decision by the Biden administration, whether it’s by design or sheer stupidity, hurts our small businesses and the hard working women and men who keep our economy running. People in the private sector know this. It’s about time the bureaucrats in DC realize this as well.”

“I think mandating a vaccine without taking into account natural immunity is wrong on both policy and ethical grounds,” Ingoglia said. “Florida knows this. That’s one of the reasons we are pushing back against mandates. In the end, I think the courts will make the correct decision and Florida and Gov. DeSantis will be proven right yet again.”