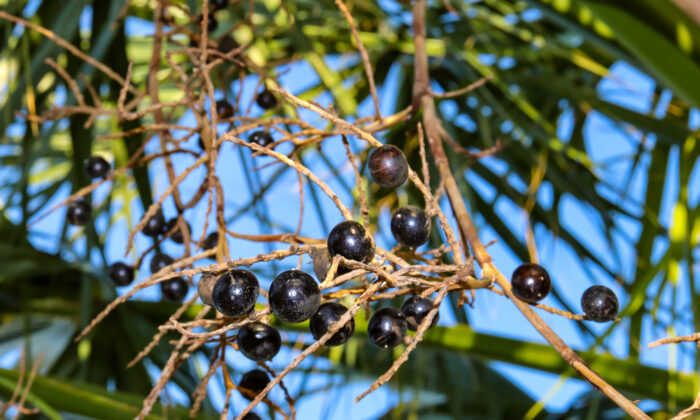 PUNTA GORDA, Fla.—Among Florida’s pine flat woods and oak woodlands there lies a native pesky plant—the saw palmetto—which has become one of the biggest agricultural industries in the state. However, harvesters say the industry is being ruined by open borders, ushering in hundreds of poaching crews that pick the berries too early.

“With open borders the influence of large poaching crews has drastically increased property damage and theft of this product,” Michael Baker from Saw Palmetto of South Florida said.

Gov. Ron DeSantis in July said that according to law enforcement he sent to the border, at least 70 percent of illegal border crossers are coming to Florida. Baker said that if true, “They’re not coming here to pick oranges and grapefruit out of season. It has to be the berries.” There are no crops this time of year to be harvested other than saw palmetto berries, he said.

The berries grow in clusters hidden among the spiky fronds of the saw palmetto that become ripe for harvest at this time of year, and, according to Baker, draw a plethora of “sack-carrying migrant pickers” who scathe the landscape of Florida’s highways, railways, and ranches across the Florida landscape for “filler income” while waiting on other crops to harvest.

However, a field buyer of the berries, Al Curry, disagrees.

“These are migrants mostly from Guatemala and Mexico,” Curry said. “I see the same faces year after year; I know open borders are a problem, but I haven’t seen the problems that Michael (Baker) has seen.”

What Curry sees is that these people are picking the berries “way too early.” He said the saw palmetto berry’s optimum ripeness is the month of September.

Curry, a seventh generation Floridian who has farmed most of his life, says that the volume of berries is definitely low.

Baker agreed saying that the berries are picked early because there is a market for low-grade oil the unripened berries have that conflicts with the higher quality berries.

“Welcome to capitalism,” he said. “Supply and demand control the market. The price point is such that it promotes the early activity. Some are willing to harvest for less.”

Occasionally one will see a hand-painted sign on the side of Florida roads that reads: Se Compra Bolita, Spanish for “ball is purchased.”  These middlemen buy the berries from the pickers and sell to people like Baker and Curry for a higher price.

“Saw palmetto berries are a filler crop,” Baker said. “There is not much farm work in August and the illegals come in and pick until other crops are ready. But they are picking the berries early when they are not ripe.”

Curry said that the berries resemble green peas and then when they are at their peak of ripeness, they will swell to the size of an olive.

After the berries are purchased from the pickers and sold to co-ops, they are put on conveyor belts, washed, and then dried and turned into a powder, which is put into capsules, tablets, and extract forms. Curry said most of his buyers are from the European market because “over there you have to have a prescription from a doctor to get this product.”

Saw palmetto was first introduced into Western medicine in the 1870’s. However, it has been used by Native Americans for generations as they saw the benefit in the berries for medicinal purposes. Most used the berries for general nutrition, and used it as a diuretic, a sedative, an aphrodisiac, and for reducing a pesky cough. The Mayans crushed the berries and drank the juice as a tonic; the Seminole Indians used them as an antiseptic.

However, the money is not in the picking of the berries, but rather the processing. Saw palmetto processing is big business. The price of harvested berries fluctuates between $1.60 and $3.00 per pound in Florida. Numerous companies like Baker and Curry’s process the raw berries into powder and sell it for upwards of $38.00 per pound. Extract sells for over $10.00 per ounce and packaged capsules sell for various prices in the vitamin section of many retailers.

In the United States, saw palmetto is the hottest thing in men’s health and can be found on the shelves of grocery stores, pharmacies, and online through Amazon. In order to get them into the bottle, they have to be picked, but if you pick the berries without a permit in Florida, it could cost a trip to jail and a first-degree misdemeanor charge.

In July 2018, the Florida Department of Agriculture and Consumer Services’ Endangered Plant Advisory Council added saw palmetto to a list of commercially exploited plants. New rules were implemented on how the berries can be harvested.

The plant itself, which blankets the landscape of Florida, grow white and yellowish flowers in the spring that attract bees that produce high-grade saw palmetto honey. The flowers will then give way to small berries that will eventually turn black and ripen from August to October. Saw palmetto usually grow anywhere from 5 to 10 feet tall and 4 to 10 feet wide.

Though the plant grows in Many Floridians’ yards, homeowners are forbidden from picking them due to their endangered status. The Florida Department of Agriculture has an online permit process that is free. Anyone selling the berries is required to have copies of the pickers’ permits at the time of sale. The pickers sometimes wander onto state lands, which is illegal, or trespass onto privately owned lands in search of berries, sometimes even cutting through fences to gain access.

So far this 2021 season, The Office of Agriculture Law Enforcement (OALE) Bureau of Investigative Services has made three arrests related to palmetto berries. Individual counties and municipalities are enforcing the law as well.

“I am grateful for our department’s law enforcement investigators who are working diligently every day to safeguard our state, including protection landowner and our natural resources from illegal harvesting,” she said. “With recent arrests of those illegally harvesting saw palmetto berries, we are sending a strong message that you either follow the rules and obtain an FDACS permit or there will be serious consequences.”

Meanwhile, environmentalists have complained that the berries are a primary source of food for Florida’s black bears. Without the berries around, the bears are forced to roam, putting them in danger of encroaching on human populations. The Florida Department of Fish and Wildlife says this time of year is when bears are looking to “bulk up” for the winter months and that saw palmetto berries play an important role in their food supply.