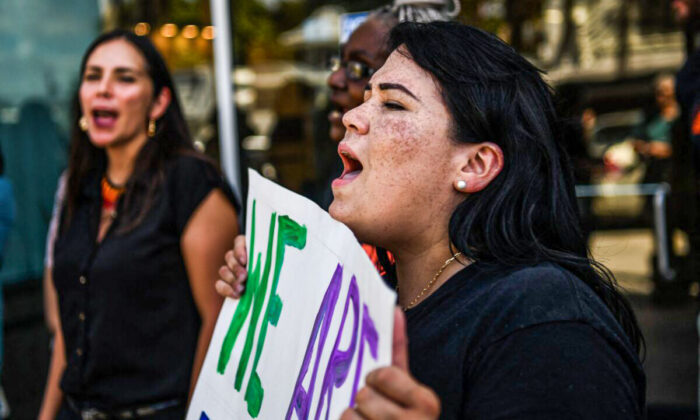 People hold placards and shout slogans as they protest outside the office of Florida State Senator Ileana Garcia in Coral Gables, Florida, on March 9, 2022. (CHANDAN KHANNA/AFP via Getty Images)
US News

The Parental Rights in Education bill is expected to hit the desk of Florida Gov. Ron DeSantis “soon,” according to his press secretary, Christina Pushaw, who told The Epoch Times on March 25 “the governor is excited to sign it” into law.

Meanwhile, increasing drama swirls about HB 1557, known by those who oppose it as the “Don’t Say Gay” bill.

Despite what the moniker suggests, the bill doesn’t ban the word “gay.” It simply bans classroom instruction relating to gender identity and sexual orientation for children in kindergarten through third grade. Teaching deemed age-appropriate is already outlined in the state’s official standards starting in fourth grade.

The bill also says schools must involve parents in any decisions involving the mental or physical well-being of the child. If they don’t, the bill would give parents an avenue for making a complaint against the school through the state’s Department of Education.

Still, progressive LGBTQ activists around the country have decried the measure, which was recently passed by the Republican-led Florida Legislature. They’ve organized protests as far away as California.

In response to the bill, Disney said it would pause contributions to all political candidates in the state. Since then, Disney workers in Florida and California have briefly walked off the job repeatedly in protest, saying their employer wasn’t going far enough to show outrage for the bill. The Florida Democratic Party rebuffed Disney further, saying it would move a fund-raising gala that was to have been hosted at Disney World to another venue after backlash from LGBTQ activists.

But other, less-vocal people within the gay community have strong views on the bill, too, said David Leatherwood, president of the Log Cabin Republicans, Tampa Bay chapter. The group, according to its website, is the “the nation’s largest organization representing LGBT conservatives and straight allies who support fairness, freedom, and equality for all Americans.”

People opposed to the bill “are for the sexualization of our children,” Leatherwood told The Epoch Times.

“I do not, as a gay man, believe it is the government’s job to use the public education system to teach kindergarteners about sex—I think it’s really wrong, actually. And I think it’s part of a larger agenda to push sexuality onto our children.”

“Democrats labeled this bill the ‘Don’t Say Gay’ bill,” Leatherwood said. “The bill doesn’t even say the word ‘gay.’ They stormed the [Florida] Capitol in protest, running through the hallways saying, ‘Gay! Gay! Gay!’ And then they patted each other on the back for it. It was just a media spectacle that completely captured the attention of the entire country, when most people didn’t even know what the bill was actually about.”

Indeed, some at the “We Say Gay-nesville” rally in Gainesville, Florida, on March 19 told The Epoch Times, after looking at a copy of the bill, that they had been incorrect about much of it.

About 200 cheered for speakers at the rally, who reiterated during the three-hour program that the bill is anti-gay and makes LGBTQ people less safe. They said the bill increases the risk of suicide for children questioning their gender or sexual orientation because it bans school teaching that can guide them about options.

Max, who attended the protest agreed: “I think there should be early education [about differences in sexual preferences and gender expressions], because you end up with people who are our age, and we never learned that it’s an option. We go through a lot of confusion, and it’s kind of harder when you have to do it later in life…So I think that there should still be education, but not necessarily like push to transition that early.”

It didn’t matter that some of what was said from the stage about the bill wasn’t entirely true, said one rally attendee, who asked not to be named. What matters, she said, was that people in the LGBTQ community show solidarity, and that their children see that.

She said she didn’t believe any in the LGBTQ community could be in favor of the bill, and she said she chooses to trust organizations like Equality Florida to tell her what is going on politically with regard to LGBTQ issues.

Equality Florida has launched an emotional TV ad that portrays a student who is blocked from sharing during the class “Speech Day” about her heroes—her two moms.

The bill doesn’t ban discussions on students’ LGBTQ loved ones or issues affecting them.

Leatherwood, meanwhile, says “It is completely disingenuous for them to go on this unholy crusade to act like this bill is anti-gay or hurting children. It’s protecting children, and it’s also preserving parents’ rights. If anybody should be teaching their children about gender and sexuality, it should not be the government via the public education system. It should be their parents.”

He added, “Gays are tired of being used as pawns for the Democrat agenda. It is an insult to our intelligence that they take us for granted. They think we’re stupid, and that we can’t read the bill and see what it says for ourselves.”

“Any normal person—gay or straight, with kids or without kids—can typically agree that it’s inappropriate to teach kindergarteners about sex. That’s concerning.”

He wonders why anyone would oppose the bill, unless they want to groom children to accept sexual advances.

“Otherwise, why would you? Why would you oppose it? Like so passionately? You know, like, what is your agenda?” he said. “It is very curious why these people are so passionately opposing a bill to preserve parents’ rights in their child’s sexual education.”

Responding to a reporter’s question on March 22 about the controversy over the bill, DeSantis said, “All I would tell people is, you know, read the bill. And if you have issues with it, articulate those. It’s a free country.

“But you know what, I don’t do narratives and slogans, and people just putting things out that are basically false narratives. And I think that’s what happened. I think, unfortunately, Disney’s leadership bought into a lot of the false narratives.”

Young children should not have classroom instruction on “issues involving sexuality, particularly things like transgenderism … being taught that they may be able to change genders.”

Parents should be part of those conversations, said DeSantis, who himself is the father of three children under the age of 6.

Around the country, schools keeping parents in the dark about sex and gender issues has had tragic results.

A California mother is suing a school for allegedly “coaching” her daughter on how to transition to life as a boy without her knowledge. The teen left her family, went into foster care, and began taking cross-sex hormones before killing herself by lying down across train tracks in front of a train.

The parents of a Florida 12-year-old have filed a lawsuit against their child’s school for having secret meetings with the girl, encouraging her to transition to life as a boy, and for failing to report her suicide attempts until the second time she tried to hang herself.

“Understand, if you are out protesting this bill,” DeSantis said, “you are, by definition, putting yourself in favor of injecting sexual instruction to 5-, 6- and 7-year-old kids. I think most people think that’s wrong. I think parents especially think that’s wrong.”

Jann Falkenstern and Brad Jones contributed to this report