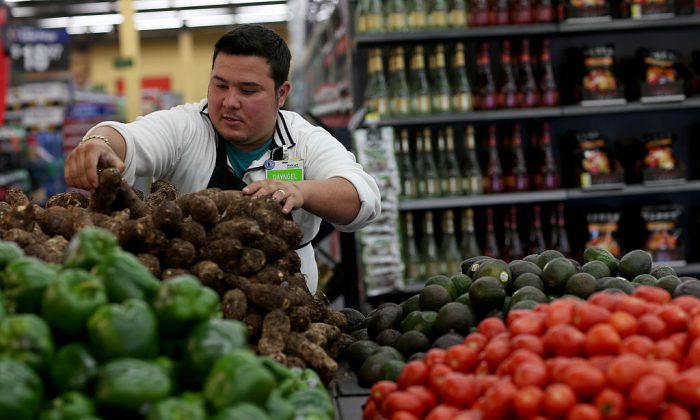 Walmart employee Dayngel Fernandez works in the produce department stocking shelves at a Walmart store in Miami, Florida on February 19, 2015. Walmart announced that it would increase the minimum wage for its workers to $11 after the passage of tax reform bill. (Joe Raedle/Getty Images)
Florida

Florida is the first state in the union to raise the minimum wage to $15 per hour by ballot measure. However, it won’t reach $15 right away. For now, the amendment raises the wage from $8.56 per hour to $10 per hour beginning Sept. 30. Each year after that, the rate is set to increase by $1 until 2026.

The federal minimum wage was introduced in 1938 under the Fair Labor Standards Act, establishing a standard of pay for workers and was the first time in history that the federal government stepped in to aid hourly workers. It was supposed to be set at 40 cents an hour, but in order to win support for it in southern states it was reduced to 25 cents per hour.

What some see as a victory for workers, others see as a potential economic disaster for small businesses.

Carol Dover, President and CEO of the Florida Restaurant and Lodging Association, said the impact to small business the wage hike will have in the wake of the pandemic could spell disaster.

“Even before the COVID-19 pandemic, raising the minimum wage was going to be a burden on small businesses across Florida,” she said in an emailed statement to the Epoch Times. “While the need for employees post-pandemic has resulted in market wages higher than the minimum wage and other added benefits and incentives, not all businesses can afford this across-the-board wage hike.”

Dover said that the hospitality industry will be particularly hard hit.

“In the hospitality industry, many employees already make above minimum wage with tips, and raising the wage for others will result in wage compression that many businesses simply cannot afford right now,” she continued. “Businesses are still struggling to recover from the pandemic impacts and are facing historic labor shortages, supply chain issues, and rising costs on everything, and we are helping our members to identify best practices in response to current industry conditions.”

Job losses and reduced hours and benefits are another consequence, she said.

“Unfortunately, there will be unintended consequences including job loss, reductions in hours or benefits, or businesses closing, she said. “We are concerned for our hotels and restaurants who have already been through so much, and we will do all that we can to help them adjust as the wages continue to increase and industry-wide challenges persist.

Florida For a Fair Wage led the campaign in support of Amendment 2 and spent $6.26 million out of a $6.27 million budget to make sure the measure passed in 2020, which it ultimately did.

John Morgan, attorney and Amendment 2 sponsor and chair of Florida for a Fair Wage, said in 2020, “Years ago in the south they said the economy will not work if we don’t have slaves. They were so adamant about it they went to war over it. They fought each other to own people. What’s going on in America today is we’re paying people slave wages and I’m ready to go to war for that.”

The Epoch Times reached out to Morgan’s law firm but did not receive a response by press time.