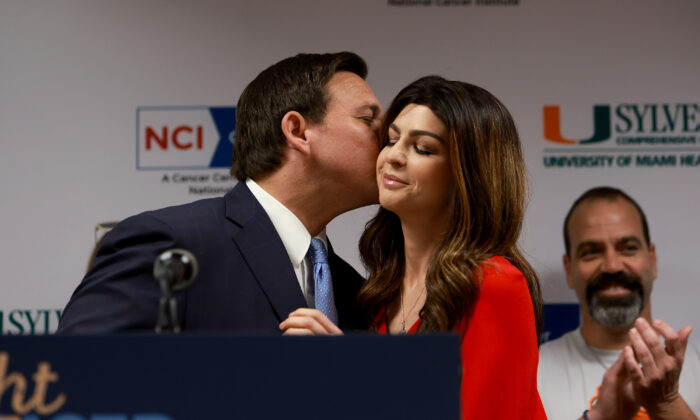 Florida Gov. Ron DeSantis kisses his wife, first lady Casey DeSantis, who recently survived breast cancer, as he introduces her to speak at a press conference at the University of Miami Health System Don Soffer Clinical Research Center on May 17, 2022 in Miami. (Photo by Joe Raedle/Getty Images)
By Jannis Falkenstern

PUNTA GORDA, Fla.–Florida’s First Lady Casey DeSantis was honored by Republican women in South Florida with the Woman of Inspiration Award on June 11 in Fort Myers.

The annual award, first instituted in 2016, honors Republican women for making strides in their communities and careers. The state’s first lady was recognized for her “inspiring” battle, and ultimate victory over breast cancer.

“No matter what you’re going through in life, no matter how hard things seem like they are, no matter how hard it feels like you have to pick yourself off the ground, and you feel like your back is against the wall, fight. Fight like hell,” Casey DeSantis told the cheering crowd at St Cecilia’s Catholic Church.

Last October, Gov. Ron DeSantis announced that his wife had been diagnosed with breast cancer. He maintained throughout her treatments, which lasted for five months, that she was a “fighter” and she would “not give up.”  At a press event in March, he announced that she was “cancer-free” and at the end of April, he said she had taken her last chemo treatment. The first week in May she made her first campaign appearance alongside the governor.

During her speech, Casey DeSantis told the award ceremony attendees that she and her husband have fought for families and parents since his taking office in 2019.

“The buck stops with the parents in the Sunshine State,” she said, noting the newly enacted Parental Rights in Education bill that prohibits classroom teachers from teaching or including in their lesson plans sexual orientation or gender identity in public schools.

“We are mammas on a mission to protect our children,” she told the group.

Addressing the issue of term limits, she said, “In Florida, school board members are term-limited, something I wish would apply to members of Congress in Washington.”

In reference to an estimated more than 1,000 people moving to Florida daily, she posed a question to the attendees:

“Now with more folks moving to Florida, you may be asking ‘will they vote for the failed policies of the states they’ve left behind?’ … Well to give you an idea, when the governor was elected in 2018, there were nearly 300,000 more registered Democrats than Republicans. There are now 176,000 more registered Republicans than Democrats.”

It is “safe to say” that people came to Florida for “freedom,” she stated.

After the announcement that she was cancer-free—just seven months after her diagnosis—the first lady returned to the campaign trail for the governor’s re-election and gave words of hope to others facing a cancer diagnosis.

“Never, ever give up–or back down,” she said. “I am a testament that God is great, God is good, and hope is alive.”