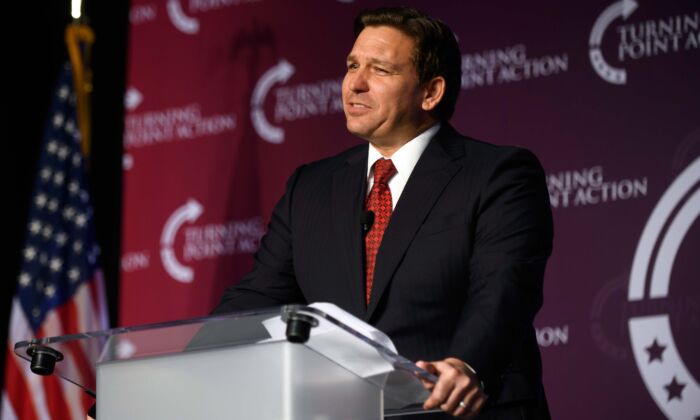 PITTSBURGH—While it is always unsettling for a political movement when its party loses power, the reality is that the movement’s coalition doesn’t necessarily collapse or disappear. Sometimes, it even gets stronger. Coalitions last beyond a candidate’s or party’s loss because the coalition is always more about the people who are in it than about any single person.

Coalitions are also often about a sense of place. Florida Gov. Ron DeSantis understands this. His message in his visit to this Pennsylvania city, along with neighboring Youngstown, Ohio, shows he recognizes that attendees at his rallies are not just interested in him; they are interested in how well he “gets” this sense of place that is everything to conservative populists.

This explains why so many at his speech welcomed his message, even while many reporters, as usual, misunderstood it.

Tickets to DeSantis’s Rust Belt events—all coordinated by Turning Point USA and all free—were gobbled up within moments of their release. His visit here was for the Republican nominee for governor, Doug Mastriano. In Youngstown, he appeared on behalf of Senate candidate J.D. Vance.

DeSantis has lived in Florida for most of his life outside of his time spent in the military and college, but he has roots in both of these areas. His father is from Aliquippa, Pennsylvania, and his mother is from Youngstown. The pair met while attending Youngstown State University. At the beginning of his 40-minute speech, he showed a photo of him as a toddler dressed from head to toe in black and gold Pittsburgh Steelers gear.

“Not a lot of people know I was born in the late ’70s to a Steelers fan,” he said as the crowd went wild.

“I think they had just won the Super Bowl probably then,” he said, laughing at the image on the screen.

What he didn’t do during the entire speech was refer to anything about his victories using “I.” That’s important: Nearly every mention of his administration’s accomplishments began with the word “we,” as was every mention of Republicans in general winning races and coming together.

It is also clear that some of the press do not understand him or the people who support the movement—or who even would consider him for the Republican nominee. The coverage was as expected: The attendees were mocked, and his speech was called “barely hidden fascism,” with barely any intellectual curiosity to understand either.

It’s like clockwork. Few reporters have learned a thing from not just 2016 but also the down-ballot races in 2020 in this state and states across the country where Democrats and the press mistakenly assumed there would be a blue wave. They also haven’t learned anything from the governors’ elections in Virginia, where Republican Glenn Youngkin won, or New Jersey, where the Democrats barely won a race they expected to win much more easily.

The establishment media are giving DeSantis, along with everyone else with an “R” after their names, treatment similar to what they gave former President Donald Trump—meaning it was never really about Trump; it was always about the establishment losing power and stature. And they plan on playing whack-a-mole to try to destroy or undermine every Republican candidate who rises from now until the cows come home—and to belittle Republican supporters, too.

Already, we are to the point where former Republican governor of Florida Charlie Crist, who is now the Democratic nominee for governor against DeSantis, opened his pitch to voters by saying: “Those who supported the governor should stay with him and vote for him, and I don’t want your vote. If you have that hate in your heart, keep it there.”

If you have any hesitation in believing the Democrats or some of the press still do not hold contempt for conservatives or have learned their lessons for calling them deplorable, Crist has proved that sentiment is still prevailing.

Youngstown State University political science professor Paul Sracic says DeSantis’s trip here and to Youngstown shows his message is emerging in prominence in the Republican Party and that he has his eyes on the presidency in 2024.

“Assuming Vance wins, he will likely remember who was there to help him in 2022,” Sracic said.

More importantly, Sracic said it shows the interesting place that DeSantis now occupies in the GOP.

“Former Democrats in northeast Ohio and western Pennsylvania were a big part of the conservative base that launched Trump into the White House in 2016,” he explained.

Sracic said that while voters in these regions still like Trump for his policies, they are not all that enthused yet with Vance—but he said they are indeed excited about DeSantis.

“He possesses those same qualities on policies, as well as attitude, that Trump did,” said Sracic, an expert in the Rust Belt and conservative populism.

“DeSantis being able to rally Trump voters to Vance is further evidence that he is the heir apparent to Trump,” Sracic continued. “Of course, if Trump runs in 2024, and DeSantis wants to challenge him, voters like those in Youngstown and around Pittsburgh will become crucial swing votes in a GOP primary. DeSantis is smart to travel up here to remind these voters of the common roots he shares with them.”