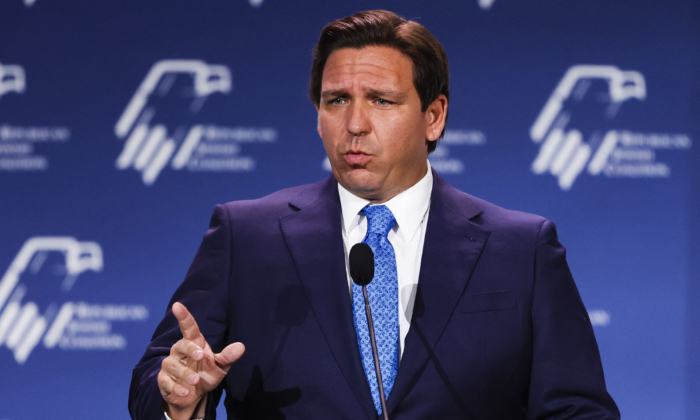 Speaking at the Florida Sheriffs Association Winter Conference in St. Johns County on Jan. 23, DeSantis called upon Florida’s legislators to reconsider the state’s requirement that a jury must vote unanimously to recommend the death sentence before a judge can consider imposing a death penalty sentence.

The governor noted how Nikolas Cruz—the 18-year-old who killed 14 students and three staff members at Marjory Stoneman Douglas High School in Parkland, Florida, on Feb. 14, 2018—was spared a death sentence last November because a Broward County jury did not unanimously agree to recommend the ultimate sentence.

As The Epoch Times reported on Dec. 13, 2022, that Cruz will receive a sentence of life without parole because the jury could not unanimously agree that he should be executed.

At a press conference following the verdict, DeSantis said that “this is a case—where you’re massacring those students with premeditation and utter disregard for basic humanity—that you deserve the death penalty.”

“The jurors came back 11-1, with one hold out refusing to authorize the ultimate punishment,” DeSantis said, adding, “And that means that this killer is going to end up getting the same sentence as those who have committed bad acts, but acts that did not rise to this level.”

DeSantis’s Democratic gubernatorial opponent on the November 2022 midterm ballot agreed that execution was the right penalty.

“There are crimes for which the only just penalty is death,” former governor and State Sen. Charlie Crist said on Twitter on Oct. 13, 2022. “The Parkland families and community deserved that degree of justice.”

For the trial, one juror faced allegations of bias that she had made her decision before the trial began. She was against the death penalty. An unidentified juror reported feeling threatened by another member of the jury.

At the sheriff’s Winter Conference on Jan. 23, DeSantis called for the state’s law to be overhauled.

“Bottom line, that should probably be changed by statute,” DeSantis said. “It’s one thing to say, ‘Yeah, obviously a majority of the jury has to—maybe a supermajority. But that one person (is) able to veto that?”

The South Florida Sun Sentinel reported that the verdict, which took Broward Circuit Judge Elizabeth Scherer an hour to read in court, was rendered by a vote of seven to three.

In an 8-1 decision on Jan. 12, 2016, the U.S. Supreme Court rendered an opinion in Hurst v. Florida, striking down the state’s death-penalty sentencing statute, which only required a majority of the jurors to agree—as unconstitutional.

At the time the opinion was rendered, Florida’s death-penalty law required at least 10 of the 12 jurors to agree on an “advisory sentence” of life or death, but they were not required to specify the factors used to reach their decision. After receiving a jury’s recommendation, the judge would hold a separate hearing to determine if there were sufficient aggravating circumstances to justify imposing the death penalty. However, the High Court decided that the requirement for a judge’s sentencing, based on a recommendation by a jury, violated the Sixth Amendment.

“The Sixth Amendment requires a jury, not a judge, to find each fact necessary to impose a sentence of death,” the Court ruled. “A jury’s mere recommendation is not enough.”

In March 2016, Florida’s capital punishment statute was amended to require that jurors unanimously agree that the prosecution had presented—beyond a reasonable doubt—that at least one aggravating circumstance existed in the case, which proved that the defendant was eligible for the death penalty.

In addition, at least ten of the 12 jurors had to agree upon a recommendation for the death penalty. Only then could a judge consider imposing a death sentence. This amendment also repealed a previous provision that permitted judges to override a jury’s recommendation of a life sentence.

In Timothy Lee Hurst v. State of Florida, the Court decided that, “because the death sentence was imposed on Hurst in violation of the Sixth Amendment right to a jury determination of every critical finding necessary for imposition of the death sentence” and because “the error is not harmless beyond a reasonable doubt under the facts and circumstances of this case,” it would “vacate Hurst’s death sentence and remand for a new penalty phase proceeding consistent with this opinion.”

In Larry Darnell Perry v. State of Florida, Florida’s Supreme Court struck down the Florida legislature’s March 2016 revision because it did not require a jury to be unanimous in its recommendation of the death sentence before the trial judge could consider imposing a death sentence.

In its reading of the U.S. Supreme Court’s Hurst ruling, the Florida court decided that a jury is constitutionally required to find:

Florida’s current law regarding the death penalty, F.S. 921.141, states that “after hearing all of the evidence presented regarding aggravating factors and mitigating circumstances, the jury shall deliberate and determine if the state has proven, beyond a reasonable doubt, the existence of at least one aggravating factor” the jury “shall return findings identifying each aggravating factor found to exist” and that the finding “must be unanimous.”

Only then can a jury “make a recommendation to the court as to whether the defendant shall be sentenced to life imprisonment without the possibility of parole or to death.”

If the jury does not unanimously agree on the existence of at least one aggravating factor, “the defendant is ineligible for a sentence of death.”

According to the Florida Department of Corrections, there are currently 301 individuals on death row in the Sunshine State.