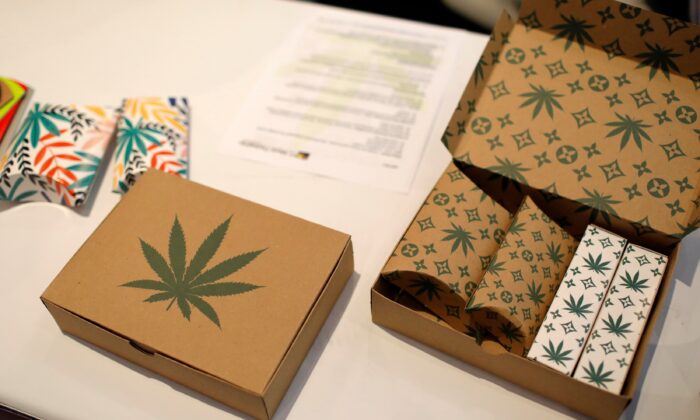 Cannabis product boxes are displayed at The Cannabis World Congress & Business Exposition trade show in New York City on May 30, 2019. (Mike Segar/Reuters)
US

“The DOJ’s argument is as offensive as it is inaccurate,” Florida Agriculture Commissioner Nikki Fried, a Democrat, said in an Aug. 8 written statement. “We were disappointed not only with the  motion but with the memo attached to the motion, calling marijuana users dangerous.”

However, the Justice Department argues in their request for dismissal that it would be “dangerous to trust regular marijuana users to exercise sound judgment” with firearms because marijuana “causes significant mental and physical impairments that make it dangerous for a person to possess (a) firearm.”

On Aug. 9, Fried responded to a motion from the DOJ to dismiss her April lawsuit challenging the disqualification of the state’s nearly 741,000 medical cannabis patients with active identification cards from owning firearms. According to Fried’s office, Florida has 2.5 million concealed weapons permit holders on record.

In her written response to the motion to dismiss, Fried said the case “goes on.”

Fried, who is an attorney, took to Twitter to express her disappointment in the Justice Department’s decision.

“We were disappointed not only with the motion but with the memo attached to the motion, calling marijuana users dangerous,” Fried posted in a Twitter “…that they would perpetuate such harmful and offensive, prejudicial stereotypes that cannabis users are dangerous or mentally ill to do so. We MUST keep fighting for equitable legalization.”

Fried has long championed those who want to exercise their second amendment rights and also exercise their freedom to pick a medical treatment that works for them in the form of cannabis use.

“The federal prohibition of a state-legal medicine continues to harm patients, imprison tens of thousands of Americans, and stifle the growth of this growing industry to the detriment of our economy. It is beyond disappointing that with this motion to dismiss, rather than taking this opportunity to address this violation of cannabis patients’ constitutional rights, the Department of Justice has chosen to double down on harmful prohibition policies,” Fried said in her statement.

Fried said she filed the lawsuit to raise awareness about cannabis reform on a national scale.

“I filed this lawsuit to bring attention to how the federal government’s inconsistent and illogical cannabis policies are creating not only confusion but actual harm,” Fried said in her Aug. 9 statement.

Fried said she is determined to fight for people’s rights to obtain legal cannabis and will continue to lobby for reform.

“Unfortunately, the issue raised in our lawsuit is just one of the many dilemmas posed that is affecting a massive number of Floridians and even more patients nationwide,” she said. Though this particular pathway intended to move much-needed cannabis reform forward might be cut off, I will never stop looking for outside-the-box ways we can further this fight until we achieve full and equitable legalization.”

The DOJ attorneys argued that “intoxication and firearms are a dangerous mix” when they asked a federal judge to dismiss Fried’s lawsuit.

“Marijuana users pose a danger comparable to, if not greater than, other groups that have historically been disarmed, such as mentally ill people,” they wrote.

In court papers, the DOJ said federal firearms restrictions are “legally sound” and that it is “dangerous to trust regular marijuana users to exercise sound judgment while intoxicated.”

The ATF in 2011 wrote an open letter to the DOJ warning federal firearms licensees not to sell to a “known user” or someone who is “addicted to marijuana,” as cannabis is defined as a “controlled substance” under the Controlled Substances Act.

The Biden Justice Department maintained in their motion that cannabis is illegal under federal law and that restrictions hindering marijuana users from purchasing firearms are justified—even though medical marijuana has been legalized in Florida.

Fried filed the lawsuit in April, alleging the federal prohibitions “forbid Floridians from possessing or purchasing a firearm on the sole basis that they are state-law-abiding medical marijuana patients” and added that it puts a “disproportionate burden on cannabis patients.”

In July, Fried’s lawyers filed an amended complaint that relied partly on a ruling where the U.S. Supreme Court struck down a New York law that placed strict limits on carrying concealed weapons in public.

However, the DOJ argued the recent high court decision said that the New York regulation “violated the Second Amendment” as it “prevented law-abiding citizens … from exercising their right to keep and bear arms.”

“These laws merely prevent drug users who commit federal crimes by unlawfully possessing drugs from possessing and receiving firearms, and only for so long as they are actively engaged in that criminal activity.” In addition, they noted that “possession of illegal drugs, including marijuana, is a federal crime.”

Such restrictions “on unlawful drug users are ‘consistent with this nation’s historical tradition of firearm regulation,’” the Aug. 8 memo continued as they quoted in part from the June 23 Supreme Court ruling concerning the New York case.

Fried said the Biden administration brought forth a “centuries-old case law” showing that, in both governments, England and the United States “regularly disarmed a variety of groups deemed dangerous, including Catholics and panhandlers.”

The federal motion points out as “most relevant” that “a long tradition exists of viewing intoxication as a condition that renders firearms possession dangerous and accordingly restricting the firearms rights of those who become intoxicated.”

But Fried’s amended complaint found that prohibiting those “who use medical marijuana from buying or having guns is a relatively recent development in the U.S.”

“Quite simply, there is no historical tradition of denying individuals their Second Amendment rights based solely (or even partially) on the use of marijuana,” she argued in her lawsuit. “In fact, historical evidence shows that marijuana was considered a legitimate and legal form of medicine in England, America, and other western countries through the mid-Nineteenth and early-Twentieth Centuries.”

DOJ lawyers argued that medical-marijuana patients should not be allowed to possess guns and be trusted not to use them “when they’re high.” To bolster their argument, they used a Florida Board of Medicine consent form, where patients must acknowledge that marijuana impairs “the ability to think, judge, and reason.”

“It is, therefore, dangerous to trust regular marijuana users to exercise sound judgment while intoxicated, a fact tragically borne out by the frequency with which marijuana users drive while impaired and suffer fatal collisions,” DOJ lawyers argued.

The 2022 gubernatorial hopeful, said in her Aug. 9 statement said using a case from 1633 where Indians were “disarmed for being intoxicated” was especially alarming.

“Calling marijuana users dangerous. Using a 1633 case about the disarming of Indians. It is very disappointing. And so, we will … have a response to the motion to dismiss,” Fried told reporters at a press conference on Aug. 9.

Fried’s lawsuit also accused the Biden administration of ignoring the Rohrabacher-Farr Amendment, a federal law that bars DOJ officials from using agency dollars to inhibit states that have medical marijuana programs “from implementing state laws that authorize the use, distribution, possession or cultivation of medical marijuana.”