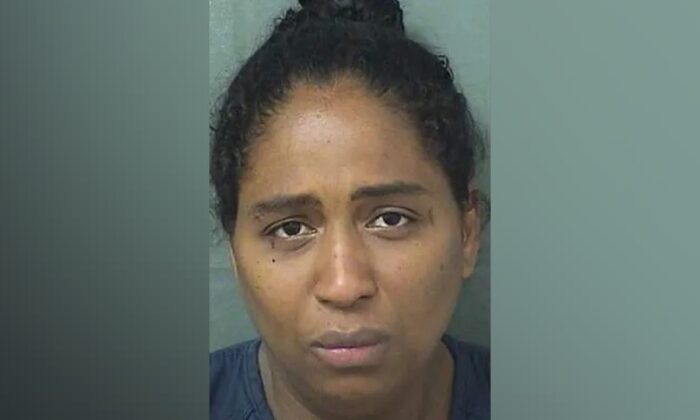 Two maintenance workers at a Boca Raton apartment complex heard faint crying sounds coming from the bin and rescued Rafaelle Sousa’s 6-pound 8-ounce baby. She was taken in by her boyfriend, who named her Sarah, the Palm Beach Post reported.

Sousa’s lawyer says the 38-year-old Brazilian woman didn’t know she was pregnant until she went into labor, and was in shock when the baby was born three years ago.

“People look at her and think they see this monster,” attorney J. Samantha Vacciana said outside the courtroom. “What they’re looking at is someone who had a severe traumatic experience that caused them to have an even more severe mental break.”

Sousa, who was already caring for her 3-year-old son, had taken Tylenol and diet pills in the month’s before the birth to cope with pain and sudden weight gain, but wasn’t able to afford a doctor’s visit and did not know she was expecting another child, her lawyer said.

When the newborn’s head hit the toilet seat, she was blue and not breathing, Vacciana said. Sousa thought the baby was dead, and she was losing blood quickly. She placed her in a garbage bag, and then into another bag with trash and coffee grounds. Police found napkins used to soak up blood inside them, along with receipts that led them to Sousa.

She later told investigators she returned twice over the next three hours trying to see if the baby was really dead, but couldn’t get close enough because people were in the parking lot.

The attorney told the Post that Sousa had only lived in the United States for four years and couldn’t read, write or speak English. She lost custody of both children following her arrest, which breaks her heart, Vacciana said.

Vacciana said she had health care professionals prepared to testify had the case gone to trial, to explain why the Sousa responded the way she did to the birth. But she wasn’t confident jurors would accept the defense.

“Being poor and unsophisticated sometimes is a crime,” Vacciana said.