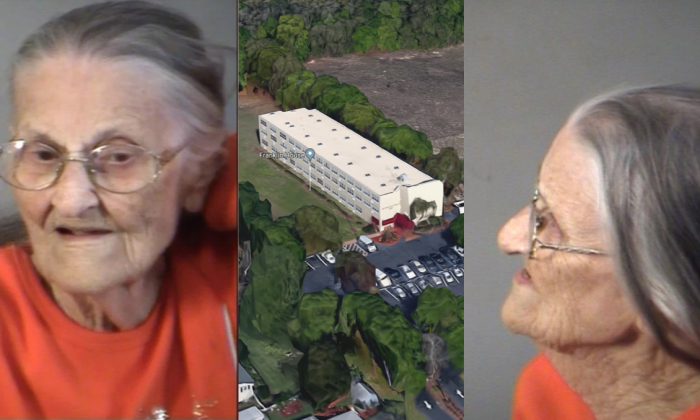 Juanita Fitzgerald narrowly avoided spending her 94th birthday in jail after getting arrested on Tuesday, Dec. 12, 2017, for refusing to leave the premises of a facility she had been evicted from. (Lake County Sheriff)
Crime and Incidents

Instead of spending her 94th birthday in jail, as reports indicated, an elderly Florida woman arrested for refusing to leave a residence she had been evicted from, found herself in a much happier place on her special day, News 6 reported.

Juanita Fitzgerald was at the Lake County Jail on Dec. 14, just one day ahead of her 94th birthday, The Epoch Times reported, but to her surprise ended up in a motel room in Tavares, Florida, on Dec. 15, after her story triggered widespread attention.

The elderly woman had fallen three months behind on her rent, according to police.

A representative for National Church Residences, which owns the Franklin House where Fitzgerald has lived since April 2011, told News 6 that Fitzgerald admitted to staff she held back the rent because she thought she was going to die soon.

The official added that her organization tried to help by reaching out first to her family and then to a number of agencies, including the Homeless Coalition, LiveStream Behavior Center, the United Way of Lake County, Family and Children’s Services of Lake County, the Area Agency on Aging, and other housing programs.

The documents allegedly show the woman had been “made well aware the day prior of her being evicted (Tuesday),” and that she was repeatedly asked to leave the property, or face arrest for trespassing.

Officers arriving at the scene on Tuesday, Dec. 12, encountered the woman in the lobby of the facility.

She refused to comply with police requests to retrieve her belongings and vacate the premises.

“After several times telling Juanita to get her belongings and leave, she refused officers’ commands and stated, ‘Unless you carry me out of here, I’m not going anywhere,’” the court documents stated.

Then the 5-foot-tall, 100-pound woman is said to have intentionally slid onto the floor and resisted police efforts to pick her up and escort her out of the building. She also grabbed at the officers, even removing glasses from one of the deputy’s faces, News 6 reported.

The body cam footage of responding officers shows the tense moments as officers lead Fitzgerald out of the building and toward their vehicle.

Officers eventually managed to remove her from the premises, insert her into the police vehicle, and transport her to the Lake County Jail, where, according to booking records, Fitzgerald is being held on the charge of “trespassing after warning” on a $500 bond.

Fitzgerald likely would have spent Friday, Dec. 15–and her birthday–in prison, were it not for a caretaker who worked with some of her neighbors at Franklin House.

“I just couldn’t let her stay in jail any longer,” Nicole Lett told News 6 reporters, adding that she was moved to act after seeing the News 6 piece on Fitzgerald.

Lett picked Fitzgerald up from the Lake County Detention Center on Thursday evening and brought her to the hotel.

“She’s 94 and she’s still feisty as ever,” Lett told News 6. “She doesn’t want peoples’ help, she wants to be on her own. But unfortunately, she needs the help right now because she doesn’t have anything anymore.”

Despite the act of kindness that has suddenly fallen into her lap, the plucky nonagenarian still faces a Dec. 27 court date and charges of tresspasing.