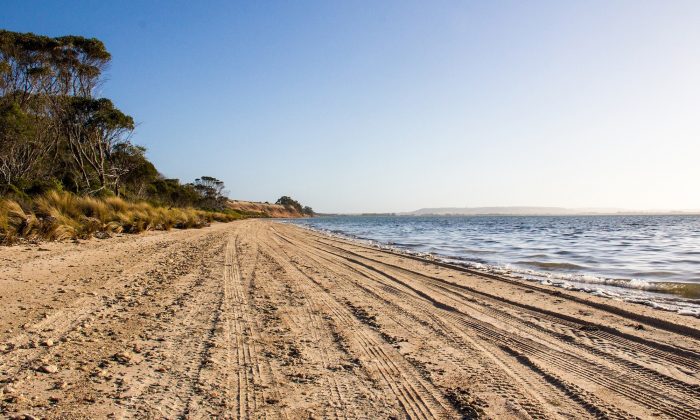 A Florida woman’s death after contracting flesh-eating bacteria has caused her family to issue a warning.

“She didn’t know that there was a small ditch there and she stumbled and hit the embankment on the other side,” Wade told the news outlet. “She had a small little 3/4-inch long cut on her shin bone.”

But apparently, that was enough to allow the bacteria to get into her bloodstream. Days later, her condition got worse and was diagnosed with necrotizing fasciitis.

Two weeks after her fall, she died, the report noted.

Her son now wants people to know the warning signs. “Maybe if she was diagnosed a little earlier, you know, maybe we’d be sitting here talking to my mom without a leg, but you know, with a life,” Fleming said.

A 12-year-old Indiana girl, meanwhile, contracted a similar bacteria while vacationing along the Florida Panhandle, which is also located along the Gulf. She survived and didn’t require an amputation.

Kylei and her family went to a beach in Destin, Florida, in early June, according to Fox59. After the family returned to Indiana, the girl began to feel pain in her leg.

“Monday, we wake up to begin our day and Kylei wakes up and she has pain in her calf on her right leg,” Kylei’s mother Michelle Brown recalled to WFLA.

Later, “I had to put her on my back and carry her around,” she said.

Her leg was swollen and she had a fever, according to the report. Brown called a doctor, who told her to take the girl to the emergency room.

“If the bacteria gets into the bloodstream and causes sepsis and multi-system organ damage, then of course the death rate is much higher,” Dr. William Shaffner, infectious disease specialist at Vanderbilt University Medical Center, told CBS. “Up to a third of people who have this serious infection can die from it.”

Lynn Fleming’s son, Wade Fleming says his mother stumbled and cut her shin when their family visited the Coquina Beach on June 10. The cut was only about three quarters of an inch long.https://t.co/IC1mOTv70k

Officials say around 1,200 people in the United States are infected with flesh-eating bacteria.

“Fortunately, flesh-eating bacterial infections are not common,” Shaffner said. “And the key thing is, of course, if you’ve had any kind of wound and you start to feel badly, please seek medical attention right away.”

The U.S. Centers for Disease Control and Prevention (CDC) says there are several types of flesh-eating bacteria. “Necrotizing means causing the death of tissues. Fasciitis means inflammation of the fascia (the tissue under the skin that surrounds muscles, nerves, fat, and blood vessels),” the agency says on its website.