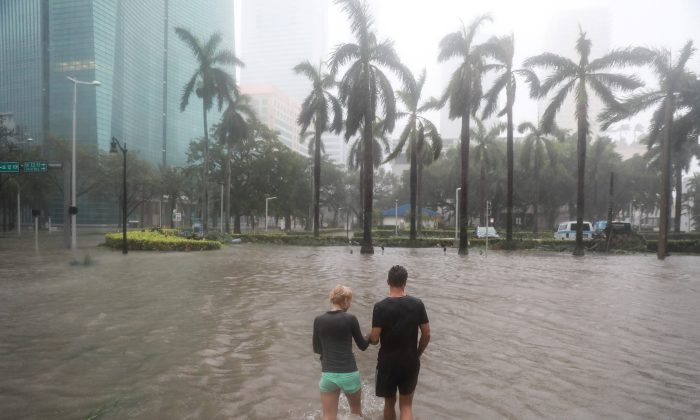 The Florida Department of Health is warning residents to be aware of wildlife snakes, alligators, and other animals that may have been ‘displaced’ during Hurricane Irma’s destructive path.

“After storms, be alert to wildlife snakes, alligators, etc. may have been displaced as a result of strong winds or rain. #Irma,” the department tweeted on Monday, Sept. 11.

In a later tweet, the department again warned residents to “beware of displaced wildlife.”

Rick Neal, a reporter for Florida Today and USA Today posted a video on Twitter that appeared to show an alligator on the street.

A large alligator farm in Florida called “Gatorland in Orlando” said all its animals were safe and would not get out.

“These critters have been fighting hurricanes and big ol’ nasty storms for about 65 million years. They are pretty good at it,” park president and CEO Mark McHugh said in a Facebook video.

To make sure the alligators don’t escape the park is enclosed with two, eight-foot-high fences McHugh said.

“None of our animals are going anywhere at Gatorland, so if you see an alligator floating down your street, it ain’t ours. Don’t call us. Call the Florida Fish and Wildlife Department,” he added.

McHugh also said that they have snakes and boa constrictors, which were safely secured.

The storm is “still producing some wind gusts to near hurricane force,” the NHC stated.

At 10 a.m. ET on Monday, Sept. 11, the Jacksonville Sheriff’s Office warned that San Marco, Riverside, Downtown Jax, Southampton, and Landon Park in Jacksonville are all under mandatory evacuation.