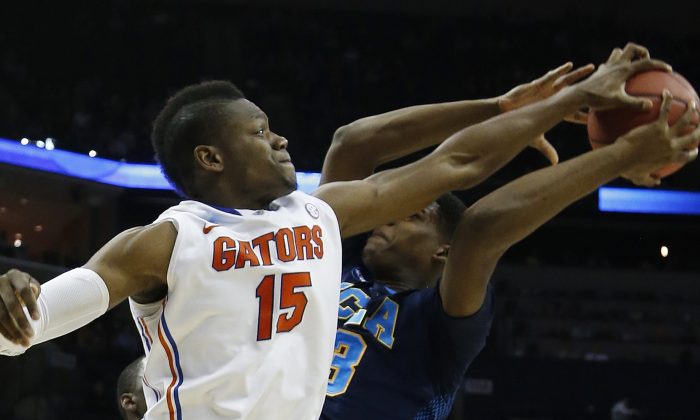 The Florida Gators take on the Dayton Flyers in the first Elite Eight game during the NCAA basketball tournament.

UPDATE: Florida won 62-52 after breaking away in the second half.

The Gators will take on the winner of Michigan State-Connecticut in the Final Four on April 5. See a full schedule here.

The teams are set to face-off on March 29 at the FedExForum in Memphis, Tennessee.

The game will be broadcast live on TBS.

Live streaming is available via NCAA.com.

Kendall Pollard #22 and Devin Oliver #5 of the Dayton Flyers celebrate after defeating the Stanford Cardinal 82-72 in a regional semifinal of the 2014 NCAA Men’s Basketball Tournament at the FedExForum on March 27, 2014 in Memphis, Tennessee. (Photo by Streeter Lecka/Getty Images)

MEMPHIS, Tenn.—These Dayton Flyers do not come with an easy scouting report.

Dayton coach Archie Miller used 12 players during the team’s 82-72 victory over Stanford on Thursday night, and 11 of them scored.

That depth has been a big reason the 11th-seeded Flyers (26-10) are still playing in the NCAA tournament’s South Region, and will face top-seeded Florida (35-2) on Saturday in the Elite Eight.

As the games get more important and intense, many coaches shorten their bench.

Not Miller. He said early in the year it was apparent the Flyers had about a dozen guys who could play and they all could be a star on a given night.

Jordan Sibert, who scored 18 points against Stanford, said he has no problem sharing playing time.

And the Flyers are winning a lot lately. They’ve already had a historic run, making the Elite Eight for the first time since 1984. Along the way they’ve knocked off in-state rival Ohio State, Syracuse, and Stanford.

“We’re going to have more than our hands full,” Miller said.

Dayton might not be quite as talented as Florida, but the Flyers certainly have plenty of bodies to throw at that problem.

Sibert was the star against Stanford, shooting 7 of 12 from the field. The 6-foot-4 junior had plenty of help come from all over the roster.

Freshman Kendall Pollard scored a season-high 12 points and sophomore Devon Scott made a couple clutch inside baskets in the second half to stave off the Cardinal’s final comeback attempt.

Even Alex Gavrilovic — who hadn’t played in seven straight games before Thursday — gave the Flyers four minutes when the team’s starters got into some foul trouble.

Every time Miller went to his bench, it seemed like the Flyers just got better. The red and blue waves kept coming, and Stanford slowly wore down by the end of the night.

“No one rolls their eyes. No one points their fingers,” Miller said. “They don’t argue at one another. It’s just been a very unique group. I don’t know if a lot of groups could pull this off, but we’ve got good kids.”

Miller said that even before the season started, he said there would be no true starters. Dayton had lost several close games last year and Miller didn’t want the emphasis put on the beginning of games.

Dayton’s depth and big wins in the NCAA tournament certainly have caught Florida’s attention. Gators center Patric Young said the Flyers’ double-digit seed is irrelevant and bristled at the notion that Dayton was a sizable underdog.

“They beat Ohio State and Syracuse — two teams that have proven themselves historically and this season on how good they are,” Young said. “If Dayton can beat them, maybe they should worry about us being the underdogs.”