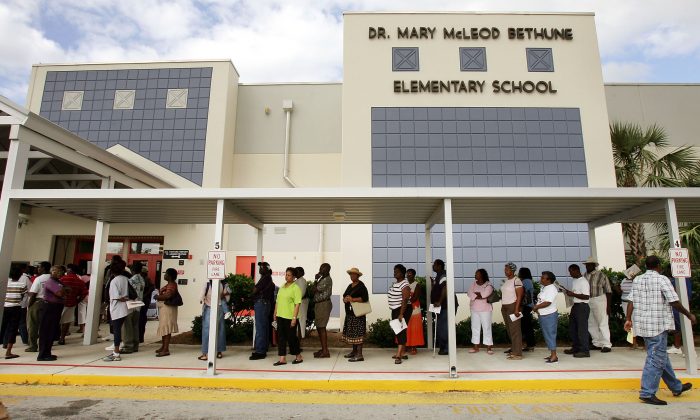 As the Aug. 23 Florida primary draws near, data released by the office of Gov. Ron DeSantis shows there are 100,000 more registered Republicans than Democrats in the Sunshine State.

In November 2021, DeSantis announced that Florida—where Democrats held an advantage over Republicans of well over 260,000 voters when he took office in 2019—saw a net gain of over 300,000 new Republican voters.

In Hernando County, where Republicans have traditionally held a majority, the number of registered Democrats (40,262) has fallen to third place below Republicans (64,488) and “others” (41,595) for the first time in its nearly 180-year history.

Florida was the No. 1 relocation destination for Americans in 2020, as The Epoch Times reported June 9, 2021. New York and California, both heavily Democratic, took first and second place in the contest for which states had the most people choosing to leave. In 2021, Florida fell to second place as the most popular relocation state behind Texas, according to data released by the U.S. Census Bureau.

A number of factors have been cited by DeSantis to account for the influx of new residents.

Florida has no state income tax and does not assess an estate tax, or an inheritance tax. It also has property taxes below the national average. However, the governor insists that what’s attracting people to Florida is his refusal to allow the rights of Florida’s residents—particularly parents—to be restricted by liberal ideologies and policies.

DeSantis refused to allow extended lockdowns on schools and businesses in the wake of the CCP (Chinese Communist Party) virus, commonly known as the novel coronavirus, and he banned forced masking and critical race theory from public schools. In May 2021, he signed Senate Bill 2006, effectively banning vaccine passports. In July 2021, DeSantis signed the Parents’ Bill of Rights into law, providing parents with control of their child’s education, upbringing, and health care. And on Dec. 15, 2021, DeSantis announced the Stop the Wrongs to Our Kids and Employees (W.O.K.E.) Act, “a legislative proposal that will give businesses, employees, children, and families tools to fight back against woke indoctrination.”

On June 15, 2021, The Epoch Times reported on the advice offered by Polk County Sheriff Grady Judd to those moving to Florida from blue states: “Do me a favor,” and “don’t vote the way the majority of the people voted from where you came, or you’ll have here what you had there. Guaranteed.”