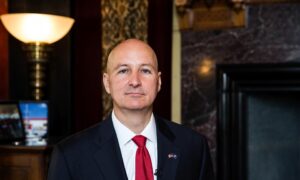 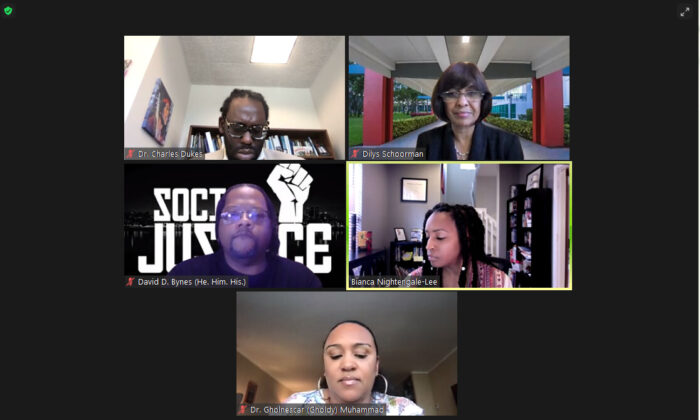 Screenshot of Sept. 20 webinar where Dr. Gholnecsar (Gholdy) Muhammad (bottom row) and professors from Florida Atlantic University teach Florida educators how to circumvent laws banning CRT in schools by layering in into the curriculum of any classroom. (Patricia Tolson/The Epoch Times)
Florida

Despite the ban on teaching Critical Race Theory (CRT) in Florida’s schools, a webinar was sponsored by Florida Atlantic University on Sept. 20 teaching educators in several Florida counties how to disguise and push CRT into any classroom, regardless of subject matter.

The link to the webinar—sent in an email instructing educators not to share it with anyone from the public—was obtained exclusively by The Epoch Times through an informant in the Florida school system.

In the email, the webinar was billed as a “free professional learning opportunity.”

“To keep this webinar secure,” read the instructions sent to those who registered, “do not share this link publicly.”

The speaker for the webinar was Dr. Gholnecsar (Gholdy) Muhammad—an associate professor of language and literacy at Georgia State University.

The four-member panel was comprised of FAU faculty:

While it is unclear how many people logged in to view the webinar, Nightengale-Lee prefaced her introduction of Muhammad with a welcome to “FAU administrators, faculty and staff, community and school partners from Miami Dade, Broward, Martin, and Palm Beach County.”

According to Muhammad, America’s current education system is failing because it is limited to teaching “skills” like math, reading, and science. She therefore considers it her mission to integrate Culturally Responsive Education (CRE) into all curriculum through what she calls the Five Pursuits, which she also referred to as “Black historical excellent models.”

During the webinar, educators were taught how to integrate these Five Pursuits into their lessons and how to layer “cultural, racial, and historical responsiveness into their learning goals, lesson plans, and the texts they use to teach.”

Muhammad also noted how she adds an “H” to CRE, expanding the concept to “Culturally and Historically Responsiveness Education (CHRE).”

“This work can be heavy,” Muhammad said of her goal to push CHRE into classrooms. “You all know in Florida. It can be heavy. It can be overwhelming and frustrating to constantly justify the need for justice for our children.”

One of the slides in her presentation posed race-based questions to educators, such as: “Are students reading and learning BIPOC theories?” and “Are assignments pushing students to think about, understand and disrupt oppression?”

According to its website, “the BIPOC Project aims to build authentic and lasting solidarity among Black, Indigenous and People of Color (BIPOC), in order to undo Native invisibility, anti-Blackness, dismantle white supremacy and advance racial justice.”

Muhammad lamented how data showed that only 20 percent of black students in the fourth grade were proficient in reading. However, rather than accepting the opinion of teachers who say these students fail because they have “low achievement scores and they hate to read and write,” she suggested that 80 percent of the black students fail because the curriculum fails to “bring joy” by enabling them to “see themselves in the curriculum.”

“Now I thought about all these folks making laws against anti CRT, and this and that, and I wondered why aren’t you making a law that we have failed 80 percent of someone’s child … if that testing data is accurate?” She lamented. “And when I say people are making bills and legislations that are anti-CRT, I’m saying Critical Race Theory.”

“Education must be directly tied to justice and anti-racism,” she insisted, suggesting that the reason why “some people not want to tie education to racism” is “because they don’t experience injustice or racism.”

“Some folks teach children and cannot say Black Lives Matter out loud,” she complained, suggesting those educators “need to ask yourself, who do you keep around you?”

“Do they hold you accountable for equity and anti-racism?” she asked. “What racist, sexist, discriminatory beliefs have been conditioned and taught to you? Your cartoons, media, songs, family. This is not just white folks’ work. It’s all of our work. We have to do this work because all of the conditioning will show up. It all comes out in our teaching and our pedagogy.

“I have rewritten the common Core standards so I know them intimately,” Muhammad boasted. “I was just tired of them. These were basic. We’re not basic. We are excellent. Our students are excellent.”

Muhammed wants to know why the education hierarchy is “not evaluating teachers in their ability to teach identity joy, social-political consciousness” rather than on “just skills.” She also wondered why it was okay for educators to teach students about Anne Frank but not about Breonna Taylor.

However, she did not address the stark, historical difference between the two.

Anne Frank was a 13-year-old Jewish girl, forced to go into hiding with her family for two years during the Nazis’ occupation of the Netherlands in 1942, only to be discovered and taken to the Bergen-Belsen concentration camp where she died in 1945.

Breonna Taylor was a medical worker shot and killed by Louisville police officers in March 2020 during a raid on her apartment, which was a target of a drug investigation into her former boyfriend, Jamarcus Glover because Glover had been receiving packages believed to contain drugs at Taylor’s home.

“Why does Frank’s oppression matter more than Brianna Taylor?” Muhammad asked. “Both of these girls were just so lovely and they did not deserve the oppression that happened to them.”

Layering CRT/CRE/CHRE/ Into All Classes

While the Florida Department of Education unanimously passed a rule banning the teaching of CRT in schools, Muhammad explained there are ways to incorporate CRT/CRE/CRHE principles into any classroom, regardless of subject matter.

Muhammad discussed how second-graders in Chicago were learning about the geometric concepts of shapes and told to go out with their families to “look for geometric shapes in the places they love to visit” as a family.

“But when we give it a bit of a makeover,” Muhammad explained how the focus could be shifted from geometric shapes toward discussions of “how do I strengthen and sustain my community and what are the amenities of my community? What do I like best about where I live?”

Rather than just learning how to write their names in kindergarten, Muhammad suggested teachers discuss “different naming traditions across cultures” and “how some names are treated unfairly.”

For math, Muhammad shared the description of a textbook for fifth-graders.

“This book will help your elementary student develop math skills needed to succeed in the classroom and on the standardized test,” she read aloud.

“Teacher’s don’t get a lot of math examples of CRE when students are learning how to find the percentage of a number,” Muhammad said, and she shared the lesson plan developed by another teacher, which she said she wished she had created herself because it “is so beautiful.”

“They were teaching students about revenue and finding a percentage but they connected it to the context of the gaming industry and video games,” Muhammad said.

Then she explained how the teacher tied “the history of video games and who is represented in the development of video games” and “the salary of video gamers and developers” to “the ethnicity, the gender” of people in the gaming industry.

Muhammad also shared how she used a math class to have her students read a news article about Black Hiker’s Week.

“Students watched videos about being outdoors,” she said. “They learned about black hikers in St Lois and people of color in outdoor spaces and how nature can elevate happiness.”

Muhammad even suggested how CRT/CRE/CRHE could be incorporated into Physical Education classes.

“When learning how to play Lacrosse, they are to be taught about the history of lacrosse and the accessibility of lacrosse in race and racism in sports,” she explained.

Muhammad also shared how she turned a tenth-grade geometry class into a platform where she had students “studying fabrics,” her “culture” and the “special” clothing she wears because it brings her “joy” and “how textiles sustained economies in African nations.”

“Our students need to be reading from different theories,” Muhammad insisted, saying all classes must be “layered” with “cognitive theories, constructivism, Critical Race Theory, critical theory, feminism, and Romanism” and educators must develop “assignments pushing students to disrupt.”

Teachers need to get tenure based on their social advocacy and activism work, how they make communities better, Muhammad suggested.

The Epoch Times reached out to the office of Gov. Ron DeSantis, asking if he was aware of the webinar and if the effort is subverting state law banning CRT in schools.

“All I can say at this time,” Christina Pushaw, press secretary for the Executive Office of DeSantis told The Epoch Times Tuesday, “is that FLDOE (Florida Department of Education) is looking into this matter.”

The Epoch Times reached out to Nightengale-Lee for comment but did not receive a response by press time.