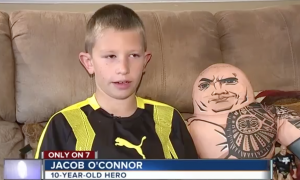 Boy Saves Brother With Hero Moves Learned From 'The Rock'
0 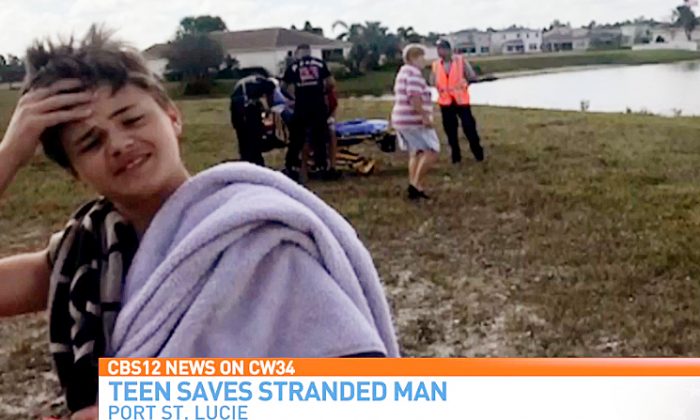 (Screenshot via CBS)
US News

A Port St. Lucie, Florida, teen is being honored as a hero by the St. Lucie County Fire District for saving his neighbor’s life.

Collin Alley, 14, was riding his dirt bike home on Feb. 10 when he saw an overturned boat in the lake next to his home, CBS News reported.

Collin recognized the boat as his neighbor’s 10-foot sailboat. He didn’t see anyone in the water.

“I look out and I see a boat flipped over in the middle of the lake,” Collin told CBS.

Alley didn’t see anyone in the water—so he immediately shifted into high gear.

Collin grabbed a styrofoam life-preserver ring—good thinking—and his boogie board and swam out toward the capsized craft.

“So basically I put this on first, the life-preserver and grabbed my board and I just ran as fast as I could,” he explained.

“I was running up here and I basically just came down to the shore, threw my board into the water, just swam as fast as I could.”

When he got closer to the boat, Collin saw his 76-year-old neighbor, Clif Boyle, clinging to the overturned boat.

“When he came and swam, I don’t know if he’s an Olympic swimmer to tell you the truth, but he seemed to be coming pretty fast,” Boyle told CBS.

Boyle told CBS that Collin gave him the life preserver, then grabbed the capsized sailboat’s lead line and started towing it to shore.

“He kept on swimming and I was kicking, but I have to tell you at 76 years old, there’s not a lot of kick left. I can tell you that for sure,” Boyle said. “And if he didn’t come along I might not be a great-grandfather anymore. I think he really saved my life. I really believe that.”

Eventually, another neighbor saw the commotion and paddled out in a canoe to help Collin tow the boat to shore.

“If I would consider a hero of the day, it had to be Collin,” Boyle said. “He was unbelievable.”

Collin doesn’t consider what he did to be anything heroic.

“I wouldn’t really call myself a hero,” he said. “I think I’m just trying to do a good deed.”

The St. Lucie County Fire District will honor Collin, a freshman at Ft. Pierce Central High School, as a Citizen Hero in a ceremony on March 21.