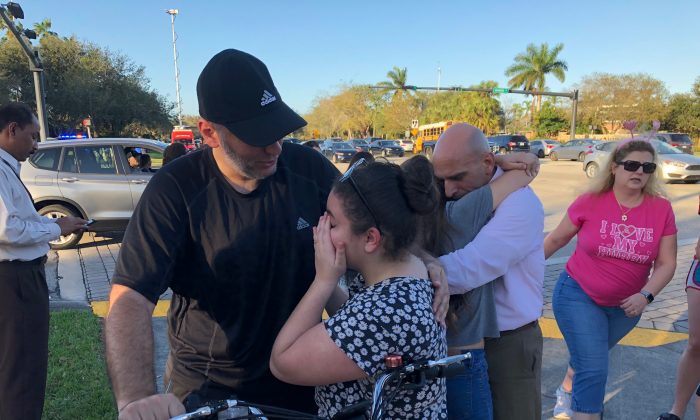 A Florida teacher hid 19 students in a closet when they heard a gunman was loose in their high school, impressing people with her quick thinking.

A gunman, later identified as Nikolas Cruz, opened fire and left 17 dead and others wounded.

First, he allegedly set off smoke grenades to trigger the fire alarm so students would file out of classrooms.

Melissa Falkowski and her students heard the alarm and began filing out of the classroom but minutes later a security guard alerted her that someone had begun opening fire.

Falkowski urged the students remaining around her to follow her back into the room.

“We sort of huddled in the corner for a few minutes and then I made the decision to move everyone to the closet,” Falkowski told CNN.

The students stood in silence, although some cried. Falkowski said she tried to keep everyone calm.

“You try to do the best you can for the kids you are supposed to keep safe,” she added.

Around 30 minutes later, a SWAT team secured the room and the group was safe.

Falkowski said a recent active shooter training given at the school helped her make quick decisions that may have saved lives.

According to her Facebook page, Falkowski lives in Coral Springs with her husband, who is also a teacher, and their children.

She has been a teacher at the school since 2004.

Cruz was eventually arrested by police officers after the attack on Wednesday.

It was also revealed that at least one other teacher, Jim Gard, hid some students in a closet.

Gard said he also moved to evacuate after the fire alarm went off but then he heard a “code red” announcement and ushered the six students who hadn’t fled into a closet.

Then, they “just turned the lights off, as you’re supposed to do in a code red—you know, an active shooter,” he told NBC.

His math students eventually were all accounted for.