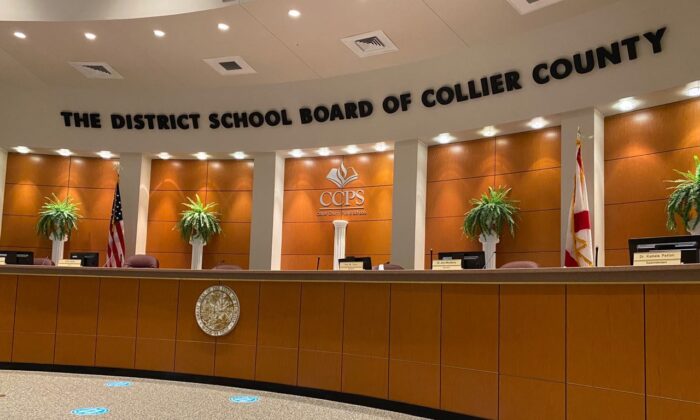 Awaiting the members of the Collier County School Board to convene the hearing regarding textbooks being considered for adoption for use in the district’s classrooms, on May 7, 2021. (Patricia Tolson, The Epoch Times)
Education & Family News

On March 18, the Florida Supreme Court refused to hear an appeal filed by the Collier County School Board over a lower court ruling stating the school board violated the state’s Sunshine Laws during its textbook selection process in the 2016–2017 school year.

Attorneys for the parents’ rights organization that filed the initial lawsuit assert that the same illegal process was used for the adoption of books for the 2021–2022 school year and have filed motions to have every textbook removed, or to have the court “order the school district to immediately start the textbook adoption process all over again.”

As explained on the website for Florida Attorney General Ashley Moody, “Florida’s Government-in-the-Sunshine law provides a right of access to governmental proceedings at both the state and local levels,” and “virtually all state and local collegial public bodies are covered by the open meetings requirements.”

On Sept. 15, 2021, The Epoch Times reported that the Second District Court of Appeal of Florida had ruled the “textbook committee” process used by the Collier County School Board to review and approve textbooks had violated Florida’s Sunshine Laws.

“The Sunshine Law applies to the Textbook Committees, and the failure to give reasonable notice to the public of their meetings resulted in violations of the Sunshine Law,” the court concluded. “Further, the School Board did not cure the violations.”

“This has huge ramifications for every Florida school district that uses a committee to adopt and purchase textbooks,” Keith Flaugh, managing director of Florida Citizens Alliance, told The Epoch Times. “This rules that school boards who delegate textbook selection to their superintendent, who subsequently delegates to a committee, must operate in the sunshine with proper public notice of every committee meeting. It’s a huge win.”

Moreover, Flaugh contends that “every textbook that [Collier County Public Schools] has adopted since is tainted unless they can prove they cured the original public notice requirement of the Sunshine Law. It also means that the English Language Arts (ELA) and math textbooks that [Collier County Public Schools] just adopted on March 8 are null and void because all of their committee meetings to finalize those recommendations also failed to comply with the Sunshine Law and the basis for this original case.”

Brantley Oakey, an attorney for Florida Citizens Alliance, has filed motions with the local court to amend the final judgment entered by the Second District Court of Appeal.

“In September, the Second District Court of Appeal entered a ruling that found the trial court had erred and the school board of Collier County had violated the Florida Sunshine Laws in the way they went about adopting the textbooks for the 2016–2017 cycle,” Oakey explained to The Epoch Times, “which included all of the social studies or social science textbooks for every grade in Collier County.”

“That means the school board has exhausted any and all remedies at trying to stay the effect of the Second District’s mandate and there’s no further possibility for appeal,” Oakey concluded.

Because the process used in 2017 was deemed to have violated Florida law, and the same process was used to adopt the current textbooks, Oakey contends that “every textbook being used in Collier County is unapproved and therefore illegal because state law requires that every textbook be approved through a specific approval process in the district.”

“We have filed motions with the local court to amend the final judgment they entered, which is erroneous, to have it reflect the order of the Second District Court of Appeal and are asking the local court to enforce the Second District’s order, which specifically asks that every textbook be removed or they order the school district to immediately start the textbook adoption process all over again so all the textbooks currently being used in the classroom will go through the legal vetting process in the Sunshine where the public can participate in the meeting and provide input.”