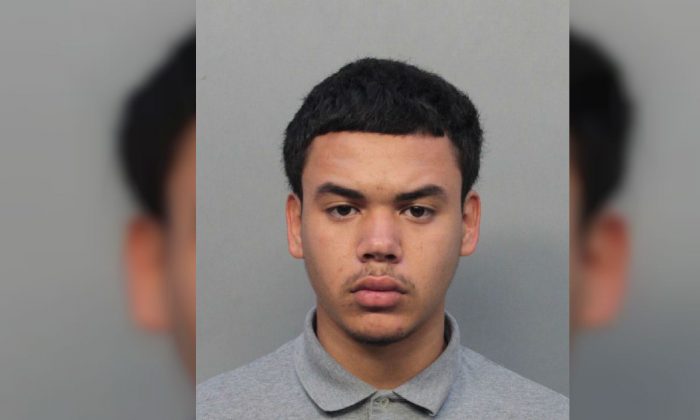 Gianny Sosa-Hernandez, 18, was arrested on April 15 for allegedly wrestling with a fake alligator at a shopping mall, police said. (Miami-Dade County Corrections and Rehabilitation)
Crime and Incidents

Florida Student Arrested After Wrestling Fake Alligator in a Mall

A Florida teenager was arrested on April 15 after being filmed wrestling a fake alligator display at a mall, police said.

Gianny Sosa-Hernandez, 18, was charged with criminal mischief for damaging the display—worth about $3,500—for slamming the fake alligator into a small pond at the Falls Shopping Center on March 30, reported Local10.com, citing an arrest report. Authorities first became aware of the incident after the 18-year-old’s video was posted to social media.

JABRONI VS. FAKE GATOR – Last week, he was arrested after police said he tried to perform the same wrestling move on his high school principal.

In the video, the Miami Southridge Senior High School student could be seen climbing over a railing into the pond before picking up the alligator and throwing it into the water. He then jumps into the water, picks up the display, and slams it back into the water using a wrestling move called RKO—which was popularized by WWE pro-wrestler Randy Orton, the news website reported.

Authorities said along with the stunt at the mall, Sosa-Hernandez was also arrested on April 10 for trying to perform an RKO on his high school principal last week, the news website reported. Several students recorded a video of the incident.

For that arrest, Sosa-Hernandez was charged with battery on a school official and interference with an educational institution. He was released without bond the next day.

The 18-year-old was held at the Miami-Dade County’s Turner Guilford Knight Correctional Center on a $5,000 bond on April 15, according to jail records.

In a similar case of chaotic conduct in public, a mother and son in Wisconsin were arrested for causing a ruckus at a local Walmart, police said in a statement.

Authorities said 46-year-old Lisa Smith, her son 25-year-old Benny Vann, and her dog Bo were causing problems at the store on April 10. They said Smith had unleashed her dog Bo, who ran up to customers, while Smith started pulling apart store displays and putting them in her cart.

Last night shortly before 8:30pm Officers were called to Walmart for a retail theft in progress. They were told a…

After employees asked Smith to leave, she started to perform karate moves in the parking lot. Meanwhile, Bo was trying to leave the store with a box of Jiffy Cornbread Muffin Mix. Smith also fought with officers when they were trying to arrest her.

When this was all occurring, her son Vann went to the back of the store, removed all of his clothing, and exposed himself to other customers. He then allegedly took clothing from racks without paying. Vann also refused to stop when officers approached him, allegedly trying to run an officer over with his scooter. He was arrested after officers physically stopped the scooter.

As for Bo, the police department said: “Bo was caught by Officers in the store and brought to the Humane Association. The dog was not charged–we issued him a warning for the theft.”