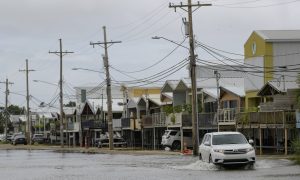 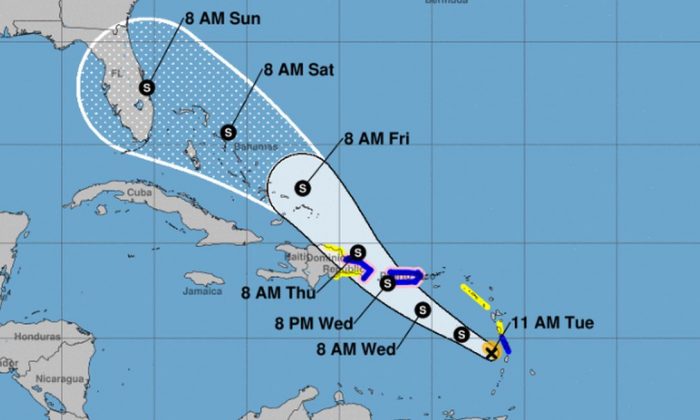 Tropical Storm Dorian has weakened as it approaches the Caribbean. (NHC)
US News

The U.S. National Hurricane Center (NHC), in an update on Aug. 27, said that Tropical Storm Dorian has weakened as it passes over the Caribbean.

However, according to AccuWeather, as the storm passes near the islands of Puerto Rico and Hispaniola, Dorian could strengthen again and become a hurricane.

The NHC’s “cone of uncertainty” forecast shows that the storm or its remnants will affect Florida as of Sunday morning at around 8 a.m.

DORIAN’S LATEST TRACK | The 11 a.m. update is out for Tropical Storm Dorian. It will likely be a tropical storm Friday over the Bahamas and move closer to Florida by Saturday night. https://t.co/OSITQU3P6L

As of Tuesday morning, Dorian was about 15 miles west-northwest off St. Lucia and is currently moving west-northwest at 13 mph. It has sustained winds of 50 mph.

According to Florida news outlet ClickOrlando, Dorian could be a possible Category 1 hurricane just south of Puerto Rico on Wednesday.

“There is a chance for rapid intensification just before making landfall somewhere along our east coast,” meteorologist Troy Bridges told the news website.

He said Dorian could make landfall in Florida as a tropical storm or Category 1 hurricane over the weekend.

“We will see the impacts in Central Florida, including some rain from Dorian, well before landfall, possibly by late Friday or early Saturday,” Bridges added. “It is still too early to tell specifics about our impacts, however.”

8 a.m. ET update: #Dorian is passing over the Lesser Antilles and is making its way towards Puerto Rico. pic.twitter.com/QVybFQ1kyd

The government of the Dominican Republic issued a tropical storm warning from Isla Saona to Samana, the NHC said.

A tropical storm warning is also in effect for Martinique and Puerto Rico.

A tropical storm watch has been discontinued for Grenada and its dependencies.

11 AM EDT: Here are the latest Key Messages on #Dorian. For more information, see https://t.co/tW4KeFW0gB, @NWSSanJuan and your local meteorological service. pic.twitter.com/OV3oSK6Eec

The NHC added there is now a hurricane watch for Puerto Rico and the Dominican Republic from Isla Saona to Samana.