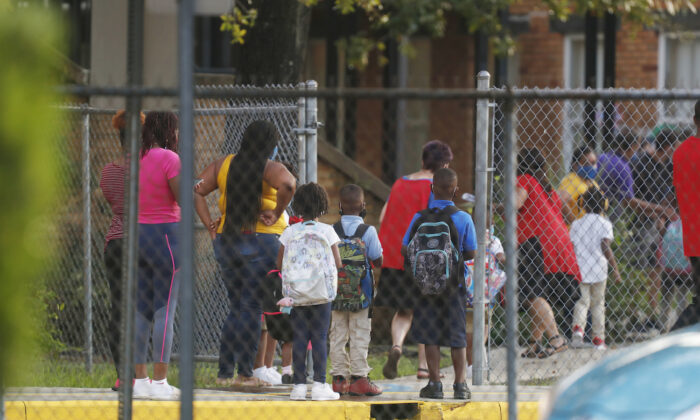 Students return to school at Seminole Heights Elementary School after the Florida Department of Education mandated that all schools must have in-class learning during the week in Tampa, Florida, on August 31, 2020. (Octavio Jones/Getty Images)
By Jannis Falkenstern

Commissioner Richard Corcoran reported to the board that none of the eight counties had provided any information proving that they were in compliance with state law before Thursday’s meeting.

“They can’t pick and choose which parts of the law they want to follow,” Corcoran said as he was handing out the penalties to the school districts.  He also gave the districts 48 hours to amend their policies before the penalties went into effect.

The state law the commissioner was referring to is an emergency rule adopted last month by the Florida Department of Health, that props up the Parent’s Bill of Rights. The rule requires that parents can opt-out their children from wearing mask mandates imposed by schools. The rule states that opting out of mask requirements is “at the parent or legal guardian’s sole discretion.”

The Biden administration has dedicated taxpayer money from the Project Safe Grant to repaying school districts the funding lost due to defying state bans on school mask mandates.

These grants according to Corcoran serve to “backfill” what was withheld from Broward and Alachua districts for not complying with state law regarding mask mandates. Last month the U.S. Department of Education chose to award COVID-19 aid funds to cover salaries of board members in Broward and Alachua Counties.  Corcoran said they were the only two districts in the country to apply for and receive this type of grant funding.

Corcoran reported during the meeting that Alachua had received a total of $147,710 in grants from Project Safe Grant and Broward has received approximately $420,000. The state began withholding Alachua’s funding on Aug. 28 which so far totals $13,429. The six remaining counties were also penalized but their funding totals were not readily available by press time.

The state commissioner said the federal grants served to “buy off school districts” and said the federal government was interfering with the state board’s responsibility to govern its educational system, which is in violation of the tenth amendment of the constitution.

Orange County Superintendent Barbara Jenkins read her defending statement to the state board during the meeting and said, “the action was legal” and “the action was necessary” given the “alarming rise” of school-related COVID-19 cases during the August surge fueled by the contagious delta variant.”

Public comments were taken before the meeting began.  A majority of the callers were from Brevard County saying the district was not in compliance and the parents complained they were removed from a board meeting earlier in the week, which they contend was a violation of Florida Sunshine Law and asked the board to investigate.  Most asked for salaries to be withheld while one parent wanted them to take the consequences a step further.

“I would like to see the board remove the superintendent and the board members,” Catherine Delaney a parent of a Brevard County student said. “I want them held accountable; we don’t want lawbreakers on our school boards.”