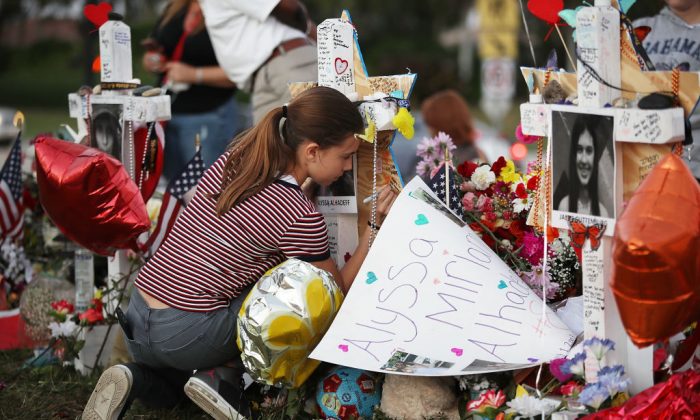 Victoria Seltzer, 11, writes a passage on a cross setup in a makeshift memorial in front of Marjory Stoneman Douglas High School in memory of the 17 people that were killed on February 14, on February 21, 2018 in Parkland, Florida. Police arrested 19-year-old former student Nikolas Cruz for killing 17 people at the high school. (Photo by Joe Raedle/Getty Images,)
US News

A survivor of the Florida school shooting said he wasn’t allowed to ask the question he wanted to at the CNN town hall on Wednesday night.

The town hall focused on survivors of the shooting, enabling them to ask questions of Dana Loesch of the NRA, Sens. Marco Rubio (R-Fla.) and Bill Nelsen (D-Fla.), and Broward County Sheriff Scott Israel.

Taking place just a little while after a similar event held at the White House, the CNN town hall focused on offering potential solutions centered on gun control, including banning AR-15s.

He attended the town hall but said that he was given a scripted question and not able to ask what he wanted.

“CNN had originally asked me to write a speech and questions and it ended up being all scripted,” Colton told WLPG-TV.

“I don’t think that it’s going get anything accomplished. It’s not gonna ask the true questions that all the parents and teachers and students have.”

Colton said he wanted to ask about using veterans as security guards and other school-safety-related questions.

Colton was credited with being one of the students who helped save lives, with his quick action during the shooting. He guided dozens of students into a Junior Reserve Officer Training Corps (JROTC) classroom and shielded them with Kevlar sheets.

“There is absolutely no truth to this,” CNN said in a statement. “CNN did not provide or script questions for anyone in last night’s town hall, nor have we ever.”

CNN response to the claim of a "scripted question" for last night's town hall: pic.twitter.com/Mz1hMqqfkw