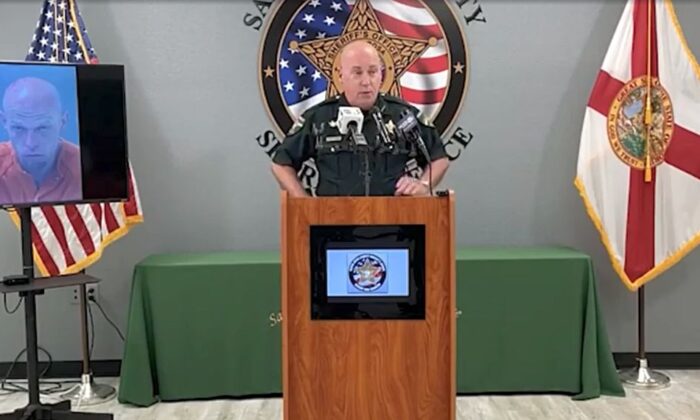 A Florida sheriff said that he’s urging homeowners to get gun safety training while encouraging them to shoot home invaders to “save the taxpayers money.”

“If somebody’s breaking into your house, you’re more than welcome to shoot them in Santa Rosa County. We prefer that you do actually,” Santa Rosa County Sheriff Bob Johnson told a news conference several days ago.

Responding to an incident in Santa Rosa County where a homeowner reportedly shot at a repeat offender who attempted to break into their home, Johnson recommended the gun owner take a shooting and gun safety class. The alleged burglar, Brandon Joseph Harris, reportedly had 17 prior arrests on his record.

“If you take that, you’ll shoot a lot better and hopefully you’ll save the taxpayer’s money,” Johnson remarked.

“You’re not in trouble,” he said of the unnamed homeowner. “Come see us. We have a gun safety class we put on every other Saturday.”

Harris wasn’t injured in the incident, Johnson remarked, adding that he “didn’t get hit, and now we have to pay for him,” local media reported. “Some people don’t learn,” the sheriff added. “For us, he is job security. I mean, we deal with him all the time.”

During last week’s incident, sheriff’s deputies were able to capture Harris inside a home and arrested him. Johnson confirmed he had several active warrants for his arrest.

The man has a record stretching back to when he was 13, Johnson said. He had spent more than six years in prison, and he’s now being held on a $157,500 bond, and faces multiple charges, records show.

Florida is one of several states with a “stand your ground” law, which stipulates that any resident of a home “has no duty to retreat and has the right to stand his or her ground and use or threaten to use” force, according to the text of the law.

Johnson in the news conference also criticized other states and municipalities for what he described as soft-on-crime policies regarding bail and sentencing reform.

“If you allow criminals certain liberties with your citizens they are going to take the extra mile,” he said. “That’s why people are leaving these areas in droves. You don’t have the right to protect yourself or your property.”