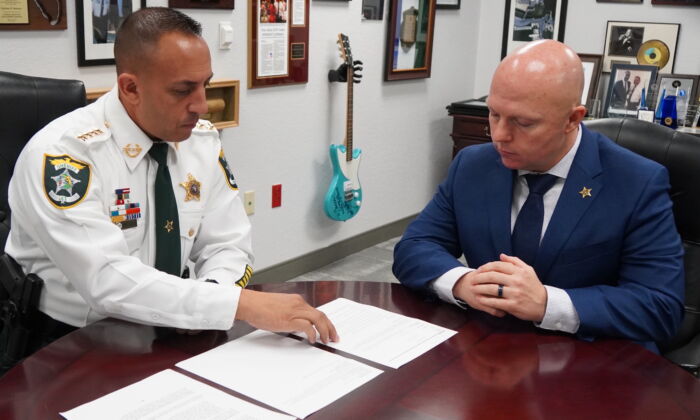 “Return to Sender” is not just a catchy Elvis song of the 1960s, but a code name for the latest elaborate criminal operation to smuggle contraband into Lee County Jail, Florida.

Sheriff Carmine Marceno said his Lee County investigators found that an “outside person” would “liquefy methamphetamine” and then apply it to postcards.

The cards were dried and then posted to inmates through traditional mail channels, he told a press conference on Oct. 26.

The sheriff said the investigation has been going on since August, when jail officers noticed something odd with inmate mail.  That is when Marceno’s team went to work on finding out what was going on.

Reports said detectives listened to jail phone calls and pored through emails and that work helped to identify the men and women involved in the crime.

Later, deputies found that a 33-year-old woman was mailing the “meth-laced” postcards to the jail and getting paid through Cash App.

Her communications were monitored to narrow down which inmates were receiving the mail.

On Oct. 14, deputies pulled the woman over and conducted a traffic stop.  They found letters, later determined to be “meth soaked”, that were addressed to inmates.

On the evidence found, the sheriff said there was “enough probable cause to search” the woman’s home, during which 18 grams of methamphetamine and additional mail containing “suboxone strips and methamphetamine”  were discovered.

The letters were addressed to inmates in Lee County facilities.

The woman’s confessed to the illegal activity and provided additional information that was “corroborated” during the course of operation “Return to Sender.”

Seven people have been arrested, with more charges and arrests pending, Marceno said.

Currently the seven, six of whom are inmates, have been charged with third-degree felonies, including “introduction of contraband into a county-detention facility,” and “attempt to solicit or conspire to commit a third-degree felony.”

Marceno said Lee County is a “law and order” county, and he has “zero tolerance for drug dealers.”

He issued a warning to others who wish to commit crimes there.

“The most creative plots are no match for my team,” the sheriff said of his law-enforcement group.

The sheriff said more arrests and charges are pending.