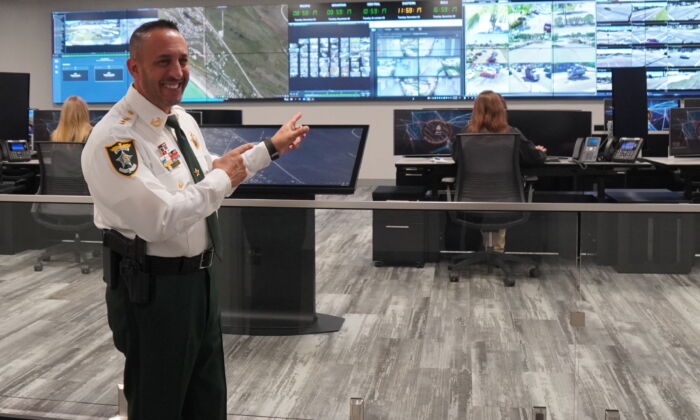 If you want to commit a crime it is best to stay out of Lee County, Florida, because chances are “you will be caught” by the ever-vigilant Real Time Intelligence Center (RTIC), warns Sheriff Carmine Marceno.

The center is a complex network of surveillance equipment that interacts in real-time and is monitored by a diverse team of officers from areas such as traffic, homicide, major crimes, and cyber-crime.

Marceno demonstrated that he can see (on the screen) where airplanes are while they are in the air their speed and altitude much like you could find on plane tracking apps on phones, but it helps Marceno when he has to deploy a drone or helicopter.

He can also click on any school icon on the interactive map and see what it is going on there.

Schools are an important focus for the sheriff as he spends a lot of his time interacting with children on and off school grounds. He says he believes  if “children do not feel safe, they cannot learn.”

“There are approximately 100,000 kids that are in Lee County schools,” Marceno said. “There are around 6,000 bus stops; we can monitor that bus stops to help keep kids safe.”

Marceno can also find any of his deputies with the tip of his finger.

“I have the ability to press an icon on the screen and see where our police and sheriff vehicles are at,” he said. “This helps if we ever need to respond in mass to a certain active situation.”

In addition to showing officers real-time activity, the center “can go back in time as well,” Marceno said.

In the case of a missing person, the officers can form a timeline by going back and watching the movements of the individual and track forward.

Lt. Josh Quaintance helps coordinate the command center. He said there are approximately 150 Department of Transportation cameras mounted on traffic poles throughout the county and the department owns seven mobile units that are used for events or an area of interest they are watching that does not have cameras.

“The software and technology are constantly evolving,” Quaintance said as he demonstrated the capabilities of how to pinpoint an area of interest on the screen. “This technology has helped solve a lot of crimes.”

The center was the brainchild of Marceno as he envisioned how technology could help his officers apprehend criminals and deter crime “sometimes before it happens.”

“Case in point,” the sheriff said. “There was a homicide committed last week; with the use of RTIC within 41 minutes … we had the suspect in custody.”

The Legislative office of Economic and Demographic Research reported that in 2019 Lee County had a total 1,478 crimes reported.  In 2020 the crime rate at dropped eight percent to 1,361 cases. Marceno it is a direct result in the technology that is in place.  The statistics for 2021 are not yet available.

RTIC data and technology is also “shared with other agencies,” the sheriff said.

Most recently in the Brian Laundrie case, the sheriff deployed his officers and other equipment to lend a “helping hand” in the densely wooded Carlton Reserve in Sarasota County.

Marceno described the terrain at the Carlton Reserve as “treacherous” requiring law enforcement officers to wade through chest-high water and dodge predatory wildlife such as alligators and poisonous snakes.  Marceno deployed the unit’s Dragonfish Drone that can fly as far as 16 miles from the operator at a height of almost four miles.

The search for Laundrie, 23, began after he walked away in September from his parents’ home in North Port, Florida. Two weeks prior, Laundrie had returned to his parents driving a van that he and his fiancé Gabby Petito, 22, had been using on a cross-country trip, but she was not with him.

She was reported missing by her parents and her remains were later found in a Wyoming desert.

Laundrie’s remains were discovered in late October submerged in a swampy area of the reserve where the Lee County sheriffs and other law agencies had been searching.

“When you have the FBI calling you for assistance, you know you really have something,” Marceno said proudly. “We work with other sheriff’s offices, the DEA, FBI, ATF, and our local agencies to assist them in their efforts to resolve cases.”

Marceno said he used “bad money” and turned it into something good through the forfeiture of property that was used in the commission of a crime.  In April 2020 the center became fully operational.

“We use money that we confiscate in drug deals to fund this,” he said.  “This costs the taxpayers of Lee County nothing.”