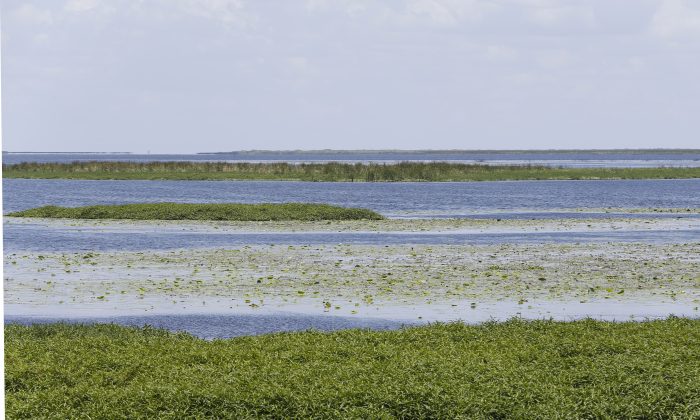 In this, Monday, July 11, 2016 photo, views of Lake Okeechobee stretch out into the distance at Harney Pond Canal Recreation Area and Margaret Van De Velde Park in Lakeport, Fla. The massive algae outbreak that recently caked parts of Florida's St. Lucie River with guacamole-thick sludge is just the latest in an annual parade of such man-made afflictions. (AP Photo/Wilfredo Lee)
US

Florida Senate to Vote on Controversial Bill that Would Harm Everglades, but Benefit Farmers

PUNTA GORDA, Fla. – A controversial water bill is up for a Senate vote Feb. 17 that could decide who controls the water levels of Lake Okeechobee, which has environmentalists and the governor concerned with the future of the Everglades and restorations efforts.

Senate Bill 2508 was a “last-minute filing” on Feb. 4 that would give farms the use of water from Lake Okeechobee.  The bill says it would require the South Florida Water Management District (SFWD) to advocate on behalf of farms that depend on the lake for water.  The Army Corps of Engineers, a federal agency, controls the lake’s water levels through the use of canals, gates and pumps.

Despite widespread opposition from advocacy groups and business people who spoke out against its passing on Feb. 9,  the bill advanced with bipartisan support, and will be put forth to a full Senate vote Feb. 17.  At that time there will be opportunity for amendments to the bill before a final vote is cast.

One of the bill’s biggest critics is Gov. Ron DeSantis (R.) who has long advocated for Everglades restoration and expressed concerns associated with lake releases, citing algal blooms and red tides that cause fish kills and respiratory problems as well as deterring tourism.

“I have been a champion for Everglades restoration and oppose any measure that derails progress on reducing harmful discharges and sending more water to the Everglades. Moreover, I reject any attempt to deprioritize the EAA Reservoir project south of Lake Okeechobee, DeSantis said in an emailed statement to The Epoch Times.

The governor recently allocated millions of state dollars for Everglades Agricultural Area (EAA).  The project began in April 2020 and is “ahead of schedule” according to the South Florida Water Management District (SFWMD) website.  The project includes wetland treatment which is designed to clean water and a reservoir that will store excess water from Lake Okeechobee.  SFWMD will construct a 6.500-acre wetland called a Stormwater Treatment Area (STA) and is scheduled to be completed in 2023.  The U.S. Army Corps of Engineers is responsible for building the reservoir that is estimated to hold 240,000 acre-feet of water.

Since Feb. 4, the proposed legislation has sped through committee with bi-partisan support, with one lone Republican opposing it.

Republican State Sen. Jeff Brandes said ‘No’ over concern that the water management district was not consulted on the bill.

“There’s a reason why they did it this way,” Brandes told fellow committee members during the Feb. 9 session. “This is a way to change statute without going through the traditional process.”

“Rather than advancing legislation seeking to affect a major change in policy, SB 2508 is being rammed through the budget process, short-circuiting public engagement and leaving affected agencies in the dark,” he continued in his statement.

A non-profit advocacy group called the Calusa Waterkeepers is dedicated to the protection of the Caloosahatchee River & Estuary, Lake Okeechobee, Nicodemus Slough, Charlotte Harbor, and Estero Bay. In posting their sentiments, they called SB 2508 a “bad bill.”

“Florida Senate bill 2508 surfaced out of nowhere on Friday, February 4th. The bill was fast-tracked, skipping the usual committee stops for public input, and heard by the Appropriations Committee on February 9,” their Website stated.

Group member John Cassani, a waterkeeper and biologist, said that agriculture is the “big winner” if the bill becomes law.

“I think agriculture will benefit in general,” Cassani told The Epoch Times in a telephone interview. “So, the paradigm for most of the high-volume releases are pertaining to water manipulation for flood control. Quite a few interest groups benefit from that flood control, but it you’re going to do that at the expense of the environment, then that’s a big problem.”

He said the lake releases are “heavily polluted” and are what is behind the increased frequency of red tide, which creates a “public health risk” as well as “ecosystem impact.”

“What it boils down to is what’s legally enforceable–that’s where the rubber meets the road,” Cassani continued. “It lends to the old saying that there’s never enough science if there’s no political will.”

The problem with the bill is that there are no “assurances” from SFWMD over “more control over water,” he said.

“I mean, they’ve battled this war–this is just one battle of the big war on water,” he said. “They’re using broad boilerplate statements when they say they’re meeting statutory obligations.”

This new legislation is causing a rift between the governor’s priorities and the Senate president, Wilton Simpson, a Republican.  Simpson is also an egg farmer and has said he was interested in running for Florida commissioner of Agriculture and Consumer Services that governs the state’s farming industry in the upcoming 2022 elections.

Simpson maintains he is also a friend to the environment.

“I agree with Gov. DeSantis’ commitment to our environment, and I, too, have long-championed these issues,” Simpson said in an emailed statement to The Epoch Times.

Not only is the governor unhappy with the fast-tracked bill, but clean water advocates and dozens of fishing guides cancelled charters for the day and scrambled to travel to Tallahassee at the last minute–some reported they had lost as much as $40,000 in revenue–so that they could speak out against the bill saying it would hurt water quality if put forth.

“This will jeopardize not only our lives but many lives in South Florida, including hotels, restaurants–many, many businesses,” Capt. Steve Friedman, a South Florida fishing guide, told committee members on Feb. 9. “This goes far beyond just a few fishing guys who might not be able to catch as many fish.”

“If you vote ‘yes’ for this bill, you will single-handedly take away years of work to better our state,” said Richardson. “Was that all smoke and mirrors? If you vote ‘yes’ on this, I’ll have my answer… You care more for the sugar industry than you do the tourists who keep coming here and powering our state.”

However, Senate President Wilton Simpson said everyone has the bill “all wrong” and that the bill “safeguards” state taxpayer funds that have been dedicated to clean water resources and “protects state water rights from federal government intrusion.”  He blamed the current administration not funding their share of the EAA Reservoir project with federal dollars from the infrastructure bill.

“Our Senate bill does not in any way reverse or hinder Everglades restoration and is entirely consistent with current policy. In fact, the bill protects existing state funding for the EAA Reservoir and cements into state law current successful water management practices that Joe Biden’s federal government is looking to change,” Simpson said. “The bill makes it clear that SFWMD needs to advocate for our state water interests, under current law–not whatever the Biden Administration wants to do.”

Simpson went on to say that the bill does not change the goals of the EAA Reservoir that he “helped draft” or detract from any commitments to the environment.

“For special interests to suggest that, under my leadership, the Senate would go back on those commitments, is not only ludicrous, it is deliberately dishonest political gamesmanship,” he said. “Furthermore, no senator has to check in with a state agency before filing a bill. I report to the people of Citrus, Hernando and Pasco Counties, not appointed bureaucrats.”

The Seminole Indians named the Lake “Okeechobee” meaning “big water.”  It has a surface area of 730 square miles and is the largest lake in the southeastern United States. Lake O as it is referred to in Florida is at the center of a large watershed, the Greater Everglades, stretching from the Kissimmee River through the Everglades and into Florida Bay.  The lake is considered a “key component” of South Florida’s water supply and serves as a flood control system.  What makes Lake O a danger to South Florida water is the agricultural runoff of fertilizers; when the lake releases water it flows east and west into rivers that house estuaries; then the releases make it to the coastal waterways that scientists attribute to toxic algal blooms and red tide.  The blooms are stimulated by phosphorus, a key ingredient in the fertilizer used on nearby ranches and farms.

The severe outbreak of toxic algae prompted DeSantis to sign an executive order on his first day in office. Vowing to protect Florida’s environment and provide clean water, he formed the blue-green algae task force and the Red Tide task force.

These task forces, made up of nationally recognized scholars from several Florida universities and the Smithsonian, provide “input that will be used to support key funding and restoration initiatives and guide regulatory changes that are needed to improve water quality” as stated on their website. Their science-based findings will be used to support funding and restoration initiatives as well as providing guidance for regulatory change to improve water quality.