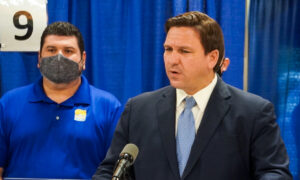 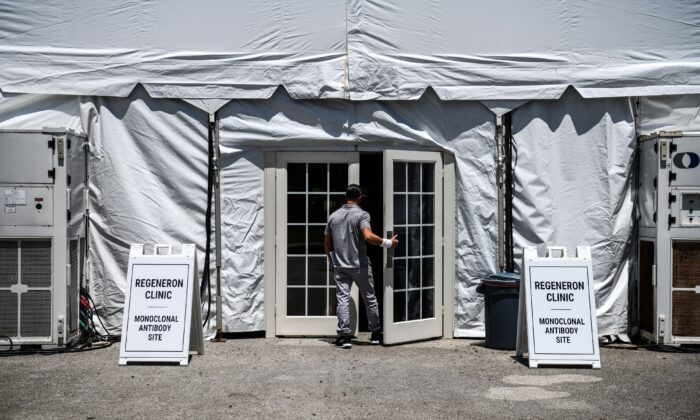 Following the Biden administration’s surprise announcement that Health and Human Services (HHS) is taking over the distribution of monoclonal antibody infusion treatments for COVID-19—reducing the number of doses in several red states by 50 percent—a spokesperson for Florida Gov. Ron DeSantis said he has reached out to GlaxoSmithKline to “fill the deficit.”

Some states are set to receive fewer doses of monoclonal antibody treatments after the Biden administration switched the distribution system this week. Florida, Alabama, Texas, and Tennessee are among the states targeted to have their monoclonal antibody (mAb) doses restricted by HHS.

“HHS will determine the amount of product each state and territory receives on a weekly basis,” a Health and Human Services spokesman said. “State and territorial health departments will subsequently identify sites that will receive product and how much. This system will help maintain equitable distribution, both geographically and temporally, across the country—providing states and territories with consistent, fairly distributed supply over the coming weeks.”

Noting that there have been no reported shortages of the treatment, Biden’s press secretary Jen Psaki was asked why the government feels it’s necessary to reduce doses to states like Florida, which has a greater need. Psaki reiterated the standard of “equity” as the reason for taking over distribution.

“Our supply is not unlimited,” Psaki insisted, “and we believe it should be equitable across states across the country.”

“The Biden administration did not give the Florida Department of Health or health care providers in Florida any notice or time to prepare for this immediate deficit,” Christina Pushaw, press secretary for the Executive Office of DeSantis told The Epoch Times. “There is no evidence of a national shortage of monoclonal antibody treatments, and no apparent justification for rationing. The excuse given by the Biden administration was ‘equity.’ Governor DeSantis spoke with GlaxoSmithKline leadership yesterday afternoon. GSK makes their own version of monoclonals that works just as well if not better than Regeneron. The Feds haven’t bought GSK supply, only Regeneron and Eli Lilly.

“The Biden administration and their allies in media have claimed that Florida is using too much monoclonal treatment because of a low vaccination rate,” Pushaw said further, “and Biden has lashed out at Governor DeSantis for opposing the tyrannical federal vaccine mandate. But Florida has a higher than average vaccination rate compared to other states. More than half the patients at some of the state monoclonal sites in Florida are fully vaccinated. They still need monoclonal antibody treatment to avoid hospitalization and death, especially if they are in high-risk groups.”

Pushaw said HHS officials told states earlier this month that they would more closely scrutinize how many of the treatments were actually being used but that the department was not going to throttle the state supplies.

Florida was informed that if it agreed to switch to the “dose pack” distribution, the state could receive 25,000 dose packs (50,000 doses) weekly for three weeks, through Sept. 19.  The Florida Department of Health (FDOH) agreed to receive the dose packs and vendors accepted delivery the following week. To date, Florida has yet to receive 50,000 doses per week.

Health and Human Services (HHS) released the update on the mAb ordering process, indicating that orders would be reviewed to ensure 70 percent utilization rates.  All state sites in Florida meet that threshold. Therefore, the state had no reason to believe that the state’s supply would be cut and there was no prior indication of the pending cut from HHS.

Biden announced his Path Out of the Pandemic: a six-pronged, comprehensive national strategy to combat COVID-19.

“The administration will increase the average weekly pace of shipments of free monoclonal antibody treatment to states by a further 50 percent in September, continuing to accelerate the federal government’s efforts to deliver lifesaving COVID-19 treatment,” the plan stated.

HHS announced the federal government is taking over distribution for all sites. Amounts for each state will be determined by HHS.

FDOH communicated to HHS the weekly need for just the 25 state-run sites of about 36,000 doses. When HHS mentioned the state receiving the order for all state sites and distributing, FDOH specifically asked if such a shift would apply to all facilities in the state providing treatment. HHS stated this was not the case and did not provide any indication of any upcoming limitation to supply, just that they were monitoring more closely.

HHS sent an email to all stakeholders nationwide indicating that a shift to an allocation strategy had occurred on Sept. 13. HHS informed that Florida’s allocation for the week of Sept. 13 would be 3,100 doses of BAM/ETE and 27,850 doses of REGN-COV (two forms of antibody treatments).

“This was the first and only indication that Florida would receive a decreased supply and would be responsible for allocating among all facilities, contradicting recent and previous guidance from HHS,” Pushaw said.

Plans By The Numbers

Since DeSantis opened the first state-supported monoclonal treatment site in Jacksonville in mid-August, there have been:

“I hope we will be able to get GSK shipments to Florida to fill the deficit,” Pushaw said. “As you can see it’s a large deficit.”

“Florida has the biggest deficit but Alabama is actually in the worst shape,” Pushaw added. “They don’t have any state treatment sites like we do.”

Asked if the move to control the flow on monoclonal antibodies was an effort to punish states with governors that would not comply with his mandates, Pushaw replied, “It’s hard not to see this as the Biden admin punishing certain states for political reasons.”

“I don’t know that for sure and I hope it’s not true, but it looks bad, especially with HHS refusing to give any explanation, beyond their public statement about ‘equity,’ for how the weekly delivery amounts were rationed for each state.”

A GSK spokeswoman told The Epoch Times via email that the company “is committed to ensuring patients have access to sotrovimab and we are currently working to make it available through existing commercial channels.”

The treatment costs $2,100, around the same cost as the Eli Lilly and Regeron shots. But if a state is going directly to GSK, it would have to foot the cost, as opposed to receiving it for free from the federal government.