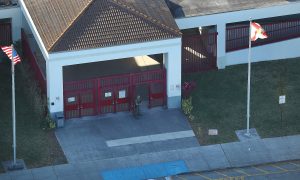 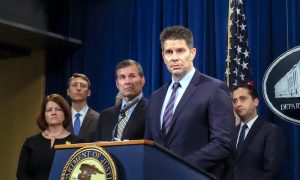 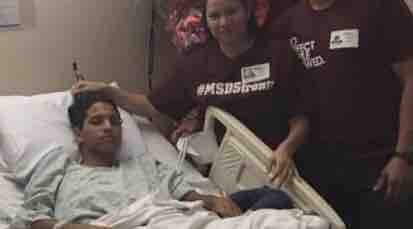 A student who used his body to block bullets aimed at his classmates during the Parkland, Florida, school shooting on Feb. 14 finds his life in peril once again.

Anthony Borges, 15, pressed his body against a classroom door while the shooter fired from the other side. Because Borges held the door, the 20 students in the room were uninjured.

Borges was one of the most seriously injured of all the survivors.

After recovering in the hospital for three weeks, Borges was sent for emergency surgery on Wednesday, March 7, because doctors thought they detected an infection in his abdomen, CBS News reported.

“Our son, Anthony had to be rushed into an emergency operation after days of showing signs of a possible infection in his abdomen,” Borges’s father, Royer, said in a Facebook post.

“It might take three or four more surgeries during these days to come as they assure me they have to clean him out and that all his organs are out of danger,” he added. “I am grateful for all the support given and please do not forget to pray for me and my family.”

After the surgery, Borges was placed in the Intensive Care Unit, listed in “critical” condition. The teenager has been placed in a medically induced coma while his body heals, but doctors are confident he will recover.

Anthony Borges was a trained athlete, a soccer player who attended F.C. Barcelona’s Barca Academy near Fort Lauderdale, the Sun-Sentinel reported. Likely the health and strength he developed through training are helping him now.

His association with Spanish soccer squad Futbol Club Barcelona paid off in another way. When the team’s star players learned of Borges’s bravery, they sent him a signed team jersey.

The Borges family needs a lot more help than that. And because of Anthony’s willingness to sacrifice himself for his friends, he is finding friends and supporters everywhere.

A GoFundMe account devoted to paying off Borges’ medical bills has raised almost $660,000.

The Borges family currently lives in a four-story apartment building, but in his injured state, Anthony cannot be moved up and down flights of stairs.

A Miami non-profit called No More Tears has raised enough money to move the family into a single-story home.

“No More Tears is paying for first, last, and security deposit for the family to move into a house,” Somy Ali, founder of No More Tears, told the Sun-Sentinel.

The Borges family will also be suing Broward County Public Schools and the Broward County Sheriff’s Office in order to raise funds to pay for their son’s recovery, CBS reported.