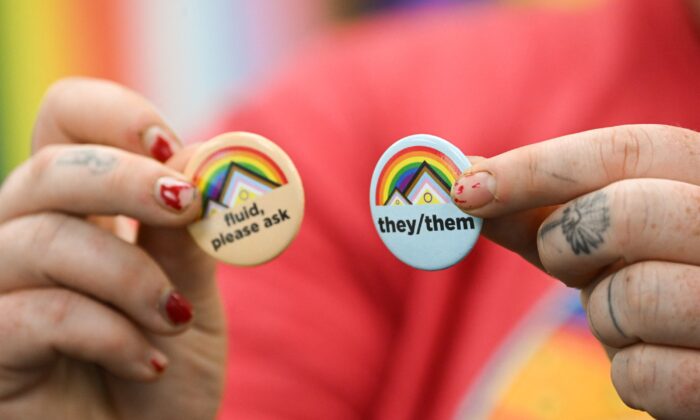 An LGBT activist holds pins about gender pronouns on the University of Wyoming campus in Laramie, Wyo., on Aug. 13 2022. (Patrick T. Fallon/AFP via Getty Images)
By Jannis Falkenstern

Jacksonville Area Sexual Minority Youth Network (JASMYN) fell out of favor with the school district after a parent complained after seeing a social media post by the organization showing a minor participating in a lewd novelty card game.

The memory game by Drunk Stoned or Stupid involves collecting matched pairs of images of male genitalia of varying sizes and skin colors. It can be found on web stores such as Amazon, and is marked with a disclaimer that it’s for players at least 18 years old.

“The district simply cannot partner with the organization given their use of program materials that the district believes to be inappropriate for use with children,” Duval County Superintendent Diana Greene wrote in a prepared statement released on Nov. 29.

“Although JASMYN has been a partner to the district for over 20 years, providing support and resources for students, staff, and the community, we have decided to terminate our current services agreement with their organization.”

In an interview with News4Jax television station, JASMYN CEO Cindy Watson called the post a “regrettable mistake” but said the game was never available to minors.

“We never use that game on our campus with teenagers or with 13-year-olds,” Watson said in the interview. “In particular, we’ve never done sex education of any kind, including that game.”

JASYMN’s focus is on counteracting bullying and harassment that the LGBT community “encounters every day,” Watson said.

The school district’s move was “an overreaction to a far-right extremist website spreading inflammatory misinformation about our HIV prevention work with young adults,” Watson said in her statement.

According to its 2021 annual report, JASYMN took in $4.08 million in revenue.

In the organization’s 2020 report, JASMYN reported an income of $2.5 million, with 40 percent coming from government grants and 20 percent from private grants. The remaining 40 percent came from in-kind contributions and private donations.

The organization’s contract with Duval County Schools provided a maximum payment of $45,000 per year. The contract calls for JASYMN to develop programs and activities related to HIV/STD prevention and start Gay-Straight Alliance clubs in Duval County schools.

The district will determine if additional resources are needed to fill the void left after severing ties with JASMYN, Greene said.

She said she’ll ask the district’s office of equity and inclusion, as well as the health and the physical education department, to provide any additional support for students with concerns about HIV/STD transmission or mental-wellness issues.

Watching out for issues that expose children to inappropriate materials is a big part of what CCDF does, said Sarah Calamunci, who works in leadership in the organization’s education division.

“CCDF-USA is dedicated to protecting children and families,” Calamunci told The Epoch Times in an emailed statement.

“Fortunately, with JASMYN, there was a collaborative effort to shine light, and the efforts of many increased community awareness,” Calamunci said. “This public awareness and pressure resulted in DCPS canceling all contracts with JASMYN.”

The district will face another controversial topic on Dec. 6 when school board members vote on a new sex education curriculum.

At a September meeting, outraged parents showed up to complain about the supplemental materials the schools planned to use that consisted of colorful condoms and seven-inch wooden “condom demonstrators” in the shape of male genitalia in sex-ed classes.

The materials were intended for use by students in the 6th, 7th, and 8th grades.

Just before the meeting, the school district pulled discussion of the materials from the agenda, saying a plan to use alternative materials would be developed, instead.

“Starting from scratch and adhering to the boundaries of Florida statute will be a far easier task than trying to modify or find existing publisher materials that may or may not meet Florida’s standards” for sex-education instruction, Superintendent Greene said in a statement about the controversy.

In response to losing their funding from Duval County Public Schools, JASYMN is rallying supporters to speak at the meeting.

“Many of the youth JASMYN serves attend DCPS. The school board will be voting on the inclusion of sex-ed materials in their curriculum, and we need you to advocate for safe schools and sex ed that are LGBTQIA+ inclusive!

“Our district should focus on education, not discrimination.

“In order to ensure that Duval County provides a safe and inclusive environment for all students, we need to mobilize supporters to attend and make sure their voices are heard.”

The Epoch Times reached out to JASMYN and Duval County Public Schools for comment, but did not receive a response by press time.