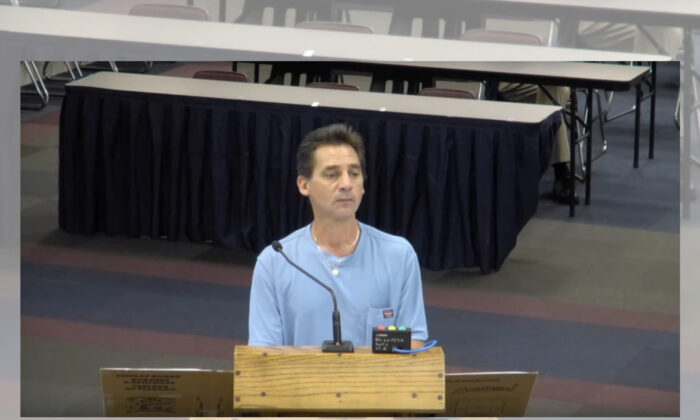 The Clay County School Board in Florida cut off a speaker’s microphone at its school board meeting after the man started reading a sexually explicit passage from a book that is available in local school libraries.

During the public comment session of a June 30 meeting, a man identifying as Bruce Friedman expressed concerns over the 2009 book “Lucky” by Alice Sebold, which is based on the author’s own experience as a rape victim, only to have his microphone turned off before he could read from the memoir a graphic description of a rape.

“If there’s children watching, cover their ears,” said Friedman, who represents the Florida chapter of parents’ organization No Left Turn in Education. The meeting was live broadcast on YouTube and community television.

Board’s attorney James Bruce Bickner immediately ordered someone to turn off Friedman’s microphone, telling the man to “hush your mouth.”

“The reason I’m stopping you is because these meetings are—if you’ll hush your mouth for a minute and listen, instead of just talking, you may learn something,” Bickner told a protesting Friedman. “You’ll get [speaking time] back, but you’ll get it back to talk about something besides reading pornography into a public television set.”

Bickner moved on to explain there are state and federal laws that prohibit “publishing these things to a child” that could be watching the meeting on live TV. This prompted Friedman to argue that materials deemed inappropriate for TV broadcasting shouldn’t be made available to students in school libraries either.

The attorney then told Friedman to file a written request so that a committee could review and potentially take down the book. “The committee will make the decision as to whether that belongs on a library shelf or whether or not it’s obscenity,” he said.

Chief Academic Officer Roger Dailey also assured Friedman that the board will adjust its book review policies in accordance with Florida’s new curriculum transparency law, under which parents have the right to inspect materials in their child’s school and object to materials that they find inappropriate. He also agreed that what Friedman was trying to read out “clearly would” violate existing state law related to pornographic material.

“As a parent of three kids, I know where you’re coming from,” Dailey told the man.

Friedman was followed by a woman identifying as Ruth Bannon, who complained about the presence of “Tricks,” a 2009 young adult novel by Ellen Hopkins, in at least four school libraries within the district. Bannon was also told to refrain from reading the book’s content, which involves abuse, rape and child prostitution.

“If you start reading vulgarity, I’ll have to check the mic off. I’ll have it shut off,” Bickner told Bannon as she was about to read from the book.

“You know what’s interesting?” the woman responded. “This is in the library, that you’re allowing the kids to check out, but I cannot say it here. My whole point is … that this shouldn’t even be in the library.”

“How does this [book] improve anyone’s character, your ability to get a scholarship?” she asked. The attorney insisted that she file an objection and “let it be handled in the [book reviewing] process.”

A two-minute video clip showing part of the exchange between Friedman and the board has widely circulated on social media after it was shared by popular Twitter personality Libs of Tik Tok. It also drew the attention of Christina Pushaw, a spokeswoman for Florida Gov. Ron DeSantis.

“We encourage all parents to know their rights in this regard and work with their child’s school to ensure that no pornographic material is accessible to kids,” Pushaw said in a statement. “Any content that is too explicit to be read to a room full of adults at a school board meeting is also inappropriate for children.”

Friedman noted later that his son is not a student at Clay County School District.

“I am not going to stick him in a school with groomers and pedophiles and twisted sick people that think these books and many like them are OK to present to a child,” Friedman said in an interview with Fox News. “They are not OK. There’s no literal literary value to any of this. It’s poison.”

Clay County School District didn’t respond to a request for comment. Earlier this month, Dailey told local newspaper Clay Daily that the board was working to align its policies and procedures with the new law signed by DeSantis.

“It’s a school district’s job to teach students how to think, not what to think,” Dailey told the outlet. “So, a parent’s right to weigh in on what’s relative to their value system is something that now has been put into law.”