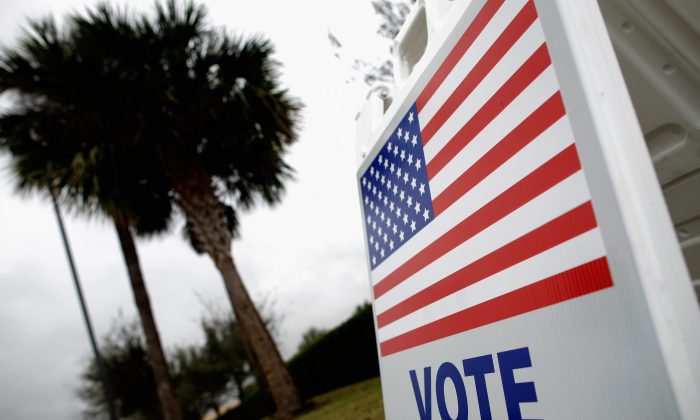 A sign lets voters know they can cast early ballots for the Floriday primary election at the South Creek Branch Library in Orlando, Fla., on Jan. 27, 2012. (Chip Somodevilla/Getty Images)
Politics

Florida Primaries Eyed: Representation of Few, or the Many?

TALLAHASSEE, Fla.—It took just 14,496 votes to win his closed Democratic primary for one of Florida’s 27 congressional seats. Now Darren Soto is virtually assured of going to Capitol Hill, unlikely to face a strong Republican challenge this November in his safely Democratic district.

The state senator snared the votes of just 2 percent of the Orlando area district’s 750,000 residents, beating three other candidates in last month’s closed-party, winner-takes-all primary. Only registered Democrats could cast ballots in Soto’s race and the small percentage of them likely decided the contest before the general election.

It’s a scenario repeated regularly in Florida’s state and congressional races in districts firmly controlled by one or the other of the two major parties. Now such outcomes are prompting calls to reform Florida’s primary system so more voters have a say in who represents them.

“That’s a question that comes up often,” said Pamela Goodman, president of the Florida League of Women Voters. Her group is studying the primary system and will make recommendations next year to lawmakers on broadening the electoral process.

Florida is one of only nine states with a strict closed primary system, which prevents independent and minor party voters from casting primary ballots. Proponents say political parties should have the sole say in who they nominate, but critics say closed primaries exclude a large swath of voters, particularly as the number of independent voters grows.

Until 16 years ago, Florida primaries weren’t even over until a candidate won a ballot majority. If no primary candidate received at least 50 percent plus one vote, the top two met in a runoff to decide who reached the general election.

But then-Florida Gov. Jeb Bush eliminated the runoff in 2002, a year he was seeking re-election and two years after his brother George W. Bush carried the perennial swing state by 537 votes in a famously chaotic presidential election. Jettisoning the primary runoff was part of reforms aimed at making Florida elections run more smoothly.

The impact on Sunshine State politics was immediate.

In 2002, political newcomer Bill McBride won the Democratic gubernatorial nomination over former U.S. Attorney General Janet Reno by 0.4 percentage points in a three-way race. Many believe Reno would have defeated McBride in a runoff and gone on to face Bush. And in 2010, now Gov. Rick Scott won the Republican nomination with only 46 percent of the vote though a runoff could have overturned the results.

And this year, state Rep. Matt Gaetz is a lock to represent northwest Florida in Congress after capturing just 36 percent of the vote in a seven-way Republican primary, meaning 64 percent of voters wanted someone else in Washington from their firmly GOP district. It’s a decision that essentially excludes Democrats and independents.

It was a runoff that helped primary runner-up Bob Graham into the governor’s office in 1979.

Eventually a three-term U.S. senator, Graham avidly supports resurrecting the runoff primary. He said the current system often encourages election of the most extreme candidates among both major parties. He said primary reforms could make representation more moderate, in line with the views of most voters.

“The question ought to be not whose convenience are we serving, but what makes democracy work best and gives the people the opportunity to have persons in office who represent the broadest consensus,” said Graham, who now runs a University of Florida center for greater citizen engagement with government.

Only 11 states still have some form of a runoff primary, mostly in the Deep South. Louisiana, California and Washington state have all-inclusive primaries where the top two vote earners advance to the general election, 15 states have open primaries and nine states allow independent voters to choose which primary they’ll vote in.

People are increasingly open to changing primary systems because they don’t like current options that contribute to partisan extremes in Washington, said Rob Richie, executive director of FairVote, a non-partisan Washington-area group that seeks to make voting more representative.

“There are different approaches that make sense for different states. There’s more openness in the reform world to not have a one-size fits all model,” he said.

Ion Sancho, elections supervisor in Leon County that includes Florida’s capital of Tallahassee, was first elected in 1988 aided by a primary runoff.

He agreed more voters should have a say in who’s elected, but isn’t espousing a return of the second primary. Instead, he said all candidates should be put on a primary ballot regardless of party and all registered voters, including independents, should be allowed to vote. The top two candidates would face off in November.

That notion doesn’t appeal to Republican state Rep. Matt Caldwell, who chairs the House committee that considers election issues. He prefers the idea of voters picking their first two choices in a crowded primary. If no candidate wins a majority, then the second choice of voters are weighed to determine a winner.

Changing Florida’s primary system would require legislative action or a change in the state constitution through a ballot initiative.

“I’m not afraid to try to tinker with it,” Caldwell said.