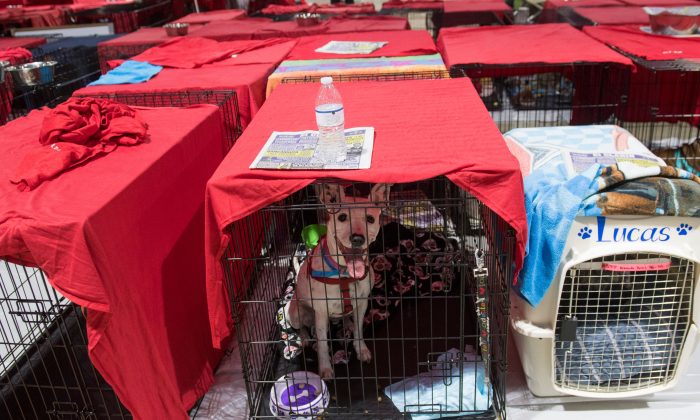 Dogs sit inside their cages as hundreds of people gather in a pet-friendly emergency shelter at the Miami-Dade County Fair Expo Center in Miami, Florida, September 8, 2017, ahead of Hurricane Irma. (SAUL LOEB/AFP/Getty Images)
US

It’s not looking good for pet owners who abandoned their pets during Hurricane Irma.

Owners who left their dogs or cats behind to fend for themselves could face criminal charges for their heartless actions.

A large number of abandon pets were found in Palm Beach County, Florida, despite warnings from the Florida Department of Health, which urged residents not to tie up their pets when evacuating homes.

“Do not leave your dogs tied up or chained when evacuating. Floodwaters are dangerous for people & pets. #Irma #FLprepares” the department tweeted on Sept. 10.

Do not leave your dogs tied up or chained when evacuating. Floodwaters are dangerous for people & pets. #Irma #FLprepares

Animal Care and Control officers in Palm Beach County found and rescued over 40 dogs during the days before the storm hit the land.

“There is absolutely no excuse for doing that,” agency Director Dianne Sauve told the New York Post.

Both Sauve and Dave Aronberg, the state prosecutor for Palm Beach County promised to crack down on cruel pet owners.

“This is a prime example of animal cruelty,” Aronberg said. “We will find you, and we will prosecute you.”

All the animals were owned by Florida residents who had evacuated their homes as Hurricane Irma approached.

In a more recent tweet, the Florida Department of Health urged anyone coming into contact with floodwaters to wash thoroughly and that includes washing pets.

Police in Montgomery County, Texas, were asking residents to unchain their dogs ahead of Hurricane Harvey and are threatening legal action against those who do not.

“I promise you, that I will hold anyone accountable that unlawfully restrains they’re [sic] dog in extreme weather conditions,” warned Chief Stephen Carlisle of the Roman Forest Police Department in a Facebook post.

The post says that Carlisle had been told about a dog that had been tied to a tree while Carlisle was checking water levels on a secondary highway in the county last year.

State transportation crews were shutting down the San Jacinto East Fork Bridge and told him the dog was out of reach as water levels increased.

“The dog barked and barked as the water kept rising until the water got high enough and the barks stopped,” reads the post.

Carlisle implored people not to keep their pets on a rope or chain.

The post also warned it was illegal to leave a dog on a rope continuously.

“It is against the law to keep a dog on a chain during extreme weather conditions or between 10 p.m. – 6 a.m.,” said the post.

That law prohibits a dog owner from leaving his or her animal outside and unattended “by use of a restraint that unreasonably limits the dog’s movement” under several additional conditions, including close proximity to a school, during a heat advisory, or if a tornado warning has been issued.