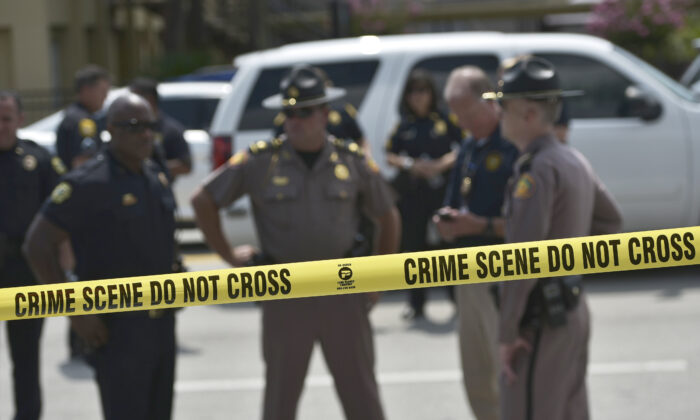 Police stand behind a crime scene tape near the mass shooting at the Pulse nightclub on in Orlando, Fla., on June 12, 2016. (Mandel Ngan/AFP via Getty Images)
Human Trafficking

More than 170 people were charged on Nov. 17 following a two-year, large-scale human trafficking investigation by the Tallahassee Police Department (TPD) and Florida state and federal officials over the sexual exploitation of a young teenage girl.

TPD Chief Lawrence Revell and state and federal officials on Tuesday announced the findings of Operation Stolen Innocence, a highly secretive investigation which began in November 2018 into the commercial sex trafficking of the victim who was 13 and 14 when the offenses occurred.

Some 106 people were charged this week with felony counts of human trafficking, lewd and lascivious battery on a child under 16, and production and possession of child pornography. Another 72 suspects were charged with misdemeanors, including solicitation of prostitution.

According to the Justice Department, 19 defendants face federal felony charges.

“The victims of sex-trafficking crimes need our help,” said U.S. Attorney Lawrence Keefe. “As a society, we must all do our part to be there for them in any way that we can.”

The investigation began two years ago after TPD investigators saw images posted online of a minor that advertised sex for money. According to the Tallahassee Democrat, the meetings were arranged over social media platforms and text messages, which took investigators months to unravel.

Chief Revell said during a press conference Tuesday that Operation Stolen Innocence could be the largest operation in the department’s history. He said many of the arrests began in July, and ended in recent days.

The Florida Department of Law Enforcement, Homeland Security, U.S. Attorney of the Northern District of Florida, the State Attorney for the Second Judicial Circuit, U.S. Marshals Service and the Leon County Sheriff’s Office assisted in the investigation.

“The arrests in this operation are the culmination of the diligent work from our dedicated investigators, who have worked tirelessly to bring justice to the victims in this case,” Revell said. “I cannot say enough about the work that you all did and how proud I am of each of you.”

“It is difficult to comprehend the depravity of these criminals who prey on the most innocent in our society,” said Kevin Sibley, Acting Special Agent in Charge of Homeland Security Investigations (HSI) Tampa Field Office.

“She does have things to say,” Bascom said, the Tallahassee Democrat reported. “She was able to say that this has seriously impacted her life, and it is very difficult at times. But she is working to get her life back.”

According to the U.N.’s International Labour Organization, forced labor and human trafficking is estimated to be a $150 billion industry worldwide.