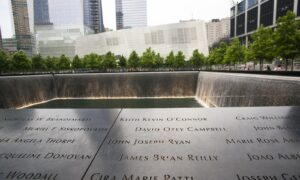 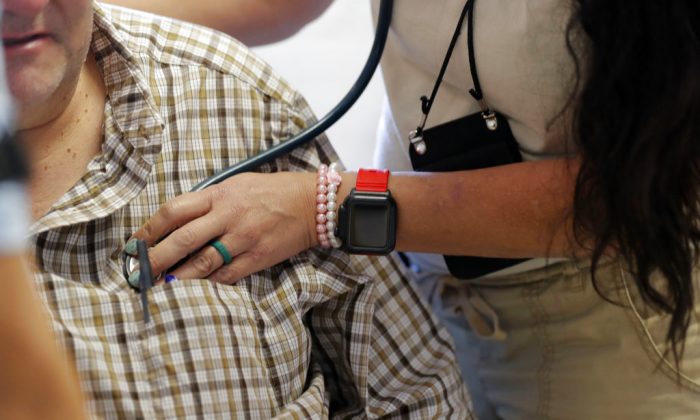 A man who did not want his name used receives medical treatment inside the Florida 5 Disaster Medical Assistance Team tent, outside the Bay Medical Sacred Heart hospital, in the aftermath of Hurricane Michael in Mexico Beach, Fla., on Oct. 18, 2018. (AP Photo/Gerald Herbert)
Crime and Incidents

PANAMA CITY, Fla.—Already sick with strep throat and asthma, Aleeah Racette got sicker when she cleaned out a soggy, moldy home after Hurricane Michael, so she sought help at the hospital where she began life. She was stunned by what she saw there.

The exterior wall of Bay Medical Sacred Heart in Panama City is missing from part of the building, and huge vent tubes attached to fans blow air into upper floors through holes where windows used to be. Plywood signs with green spray-painted letters point to the entrance of the emergency room, the only part of the 323-bed hospital still operating.

“I’ve never seen anything like this before,” Racette, 20, said Oct. 18 in a croaky voice. “I was born in this hospital.”

Medical services in the Florida Panhandle are still on life support more than a week after Hurricane Michael.

Panama City’s two major hospitals, Bay Medical and the 216-bed Gulf Coast Regional Medical Center, still aren’t admitting patients. Only emergency room services are available at either facility. Patients with the most serious needs are being sent to other hospitals by ambulance or helicopter.

Both hospitals are receiving help from Disaster Medical Assistance Teams, which set up air-conditioned tents in parking lots and operate something like the military field hospitals depicted in the old television series M(asterisk)A(asterisk)S(asterisk)H. Besides the care they’d provide on a typical basis, like treating Racette’s strep throat, doctors and nurses also are treating many people with storm-related injuries and health conditions.

“We’re seeing cuts, we’re seeing bruises and fractures,” said Martha Crombie, a spokeswoman for Bay Medical Sacred Heart who was flown in from Nashville, Tennessee, to help with hospital communications.

Back injuries are common, she said, as are people who have chronic illnesses and are out of medication. The hospital is filling prescriptions and providing a list of open pharmacies.

Crombie said Bay Medical Sacred Heart and its other facility in Panama City Beach have treated an average of 200 people a day — a number she expects to rise when a county curfew is lifted. She said fewer patients arrive after the nightly curfew takes effect, which does have an exemption for people with medical emergencies.

While they aren’t admitting patients, the hospitals are stabilizing people with serious injuries or illness and transporting them to hospitals outside the heavily damaged areas.

Some people go to the outdoor medical tents, which is where Racette was treated at Bay Medical Sacred Heart. Tony Averbuch, who leads the team of government workers providing care outside the hospital, said business is steady.

“Right now we’re seeing between 80 and 100 people a day at this site, but we’re one of many sites that are across Florida,” he said.

The team’s work fills a critical need for patients and the medical community, as Crombie said Bay Medical Sacred Heart is still trying to check on the well-being of its own workers. Of 1,700 employees, she said, the hospital has heard from only about half, many of whom likely lost phone service and internet connection or evacuated because of the storm.

Hospital executives did a helicopter tour with employees’ homes mapped out. “It was eye-opening and eye-popping,” Crombie said.

Conditions are improving, but it’s unclear when area hospitals might resume normal operations. Cleanup crews swarmed Bay Medical Sacred Heart on Oct. 18, the same day it regained power. The water also is back on, even though it’s not yet safe to drink.

By Brendan Farrington and Jay Reeves