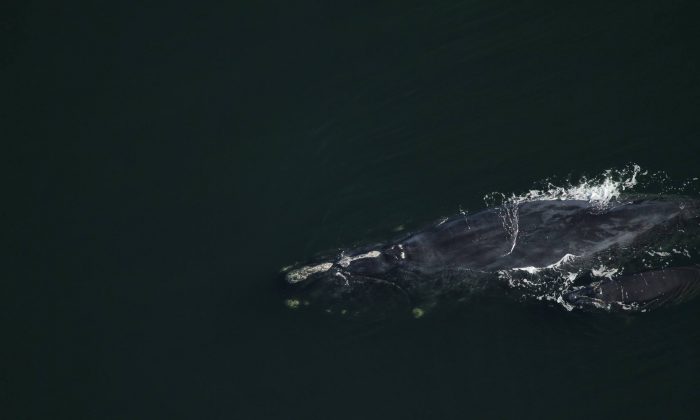 Florida wildlife officials captured the first right whales of the season recently, and the photos have been circulating widely.

The rare species moves south each winter seeking warmer waters in which to give birth. They typically live off the cost of Canada and New England.

The photos by the Florida Fish and Wildlife Conservation Commission show the a mother and her calf swimming around.

The scenes were captured during the commission’s annual survey.

The mother in the photos has been named Harmony by the officials, which took the pictures about 10 miles east of Jekyll Island on Dec. 10.

Harmony is 15 years old and the calf is her third.

According to the Smithsonian, right whales are one of the world’s largest animals, weighing up to 70 tons and stretching up to 55 feet long.

But the species is endangered, with an estimated 300 to 400 left after generations of whaling decimated them. Though whaling has stopped in the region, deaths still occur because of entanglements with fishing gear and collisions with ships.

“That’s better than zero, but it’s still not great. The current number is just a little over 500,” Hampp said. “One of the greatest difficulties right now is that right whale distribution is changing.”

Fishing gear is the number one problem nowadays, she said. The whales are also changing their usual habitats, but it’s unclear why as of yet.

Earlier in the day, the mother and calf was spotted off the coast of Georgia.

The officials there saw another calf, too, which is a good sign.

But the bad news was another whale spotted off Georgia looked sick, with a gray color to its skin and wrinkles around its blow hole.

That whale probably became entangled in fishing gear at some point.

“Typically, if they’re seen in this condition, they’re not seen again,” he said. “I’d be shocked if it survived.”

The calving season runs through March.