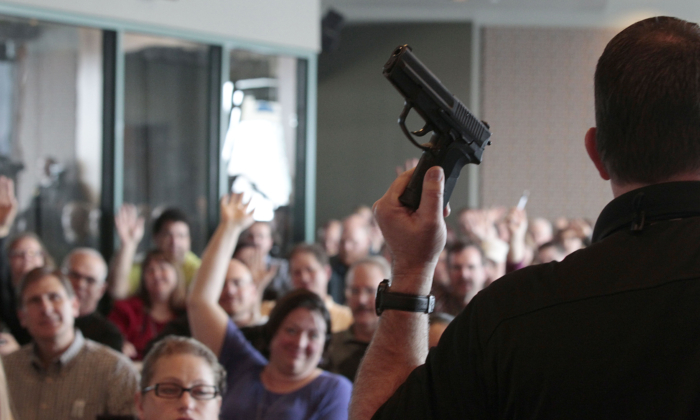 Firearm instructor Clark Aposhian holds a handgun up as he teaches a concealed-weapons training class to 200 Utah teachers on December 27, 2012 in West Valley City, Utah. (Photo by George Frey/Getty Images)
US News

Florida lawmakers rejected a proposed ban on assault weapons this week while approving a bill that would allow teachers to carry guns.

The actions were taken by a state Senate committee developing a plan to try to curb violence in schools, reported NBC.

After a debate of more than two hours, senators voted along party lines, with Republicans outnumbering Democrats and rejected the proposed assault weapons ban.

However, the committee approved a bill that would allow teachers in schools to carry guns.

The bill also raises the minimum age required to buy any gun from 18 to 21.

It also gives authorities the right to confiscate guns from anyone with mental health issues.

The issue has come to the forefront after a shooter opened fire at Marjory Stoneman Douglas High School on Feb. 14, killing 17 and wounding 16 others.

While some are focusing on the fact that he used an AR-15-style rifle to express support for a ban of the popular semi-automatic rifle, others note that the Broward County Sheriff’s Department received 39 calls relating to the shooter, while the FBI was also warned about him after he said he wanted to shoot up the school.

Others point to how districts across multiple states have allowed armed teachers for years and those districts have not seen school shootings.

Florida Gov. Rick Scott, a Republican, said he supports raising the minimum age to buy a gun as well as strengthening background checks to try to prevent mentally ill people from obtaining guns.

However, Scott does not support arming teachers.

“I believe you’ve got to focus on the people that are well-trained in law enforcement that are trained to do this. I want to make sure we have significant law enforcement presence (at schools) on top of hardening the schools with metal detectors and bulletproof glass, better perimeter fencing,” Scott told Fox News.

“I want our teachers to teach and our law enforcement officers to be able to protect the students. I want each group to focus on what they are good at.”