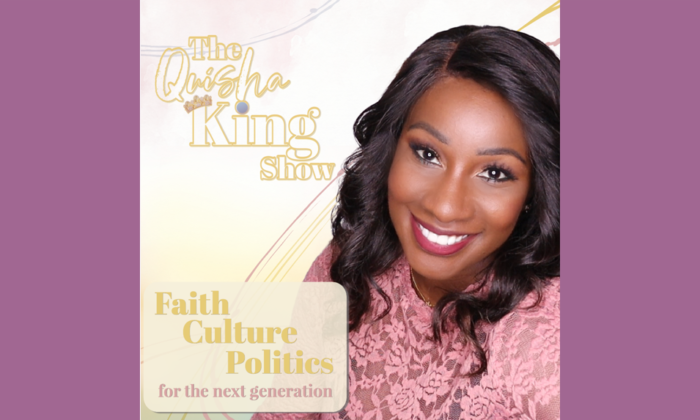 Quisha King, the Florida mom whose public comments in opposition of Critical Race Theory (CRT) before the Duval County School Board went viral on social media, has officially launched her own podcast, “The Quisha King Show.”

King, founder of the Mass Exodus Movement, political consultant, commentator, Moms for Liberty spokesperson, and education advocate; said her program “will focus on culture, faith, and politics geared toward the next generation, pretty much all focused on children.” King wants to provide parents with information from experts on issues that affect their children, such as CRT, Social Emotional Learning, Black American History, Queer Theory, pornography, and the new escalating phenomenon of transgenderism in schools.

“There needs to be a broader conversation about why so many girls are transitioning into boys in junior high and high school,” King told The Epoch Times. “That’s a cultural problem. So, looking at all of the issues going on in schools and in our society, I feel like we need to continue the conversation. But I think it has to be broadened beyond education and into culture, religion, and politics to show how all of this is affecting our children.”

Since the day her comments in strong opposition of CRT before the Duval County School Board gained the Florida mom national attention, King has appeared on FOX News and the Seth Leibsohn Show. She was also one of the speakers at the Pray Vote Stand Summit, an event by the Family Research Council in Leesburg, Virginia, and at the Truth & Freedom Foundation banquet in Omaha. Her opinions and activities have also been the subject of news reports for outlets such as The Washington Post, The Daily Mail, and The New York Post.

It was during her comments at the Pray Vote Stand Summit that her Mass Exodus Movement was born as the decimation of parents’ rights regarding the care and education of their children by school officials and the entire education system was leaving parents few options in recourse.

“I really think at this point the only thing to do is have a mass exodus from the public school system—that’s it,” King said. In response, the audience gave her prolonged applause, inspiring many to rise to their feet as they cheered.

King has also been interviewed several times by The Epoch Times where she offers a parent’s perspective on such topics as CRT, Gov. Ron DeSantis’ Stop W.O.K.E. Act, and the National School Board Association’s assertion that the act of parents like her speaking out in opposition of CRT is a form of “domestic terrorism.”

Asked about the optics of FBI agents descending upon school board meetings to drag parents away from podiums, King was forthright in her prediction.

“It will be reminiscent of using dogs and water hoses on black Americans who were fighting for civil rights,” she said bluntly.

Asked what inspired her to launch her own podcast King said, considering the growing engagement of parents at school board meetings over the past year, she “felt like there’s clearly a need for more conversation.”

King’s first guest was Dr. James Lindsay. Lindsay, a mathematician, author, and founder of New Discourses—a website he defines as “a home for the politically homeless,” especially for those who feel like they’ve been displaced from their political homes because of the movement sometimes called “Critical Social Justice.” He is considered to be an expert on CRT, which he believes is a “funnel into Queer Theory.” Queer Theory is defined by LGBTQ Nation as “a field of study that challenges existing traditional ideas about identity, sexuality, and gender—particularly that of heteronormativity, or the belief that heterosexuality is the natural, moral, or ‘normal’ expression of sexuality.” King said Queer Theory “is something else we have discovered is in schools, which is why we see children being exposed to pornography in schools.”

King has also interviewed Corey DeAngelis, the national director of research at the American Federation for Children, the executive director at Educational Freedom Institute, an adjunct scholar at the Cato Institute, and a senior fellow at Reason Foundation. King said DeAngelis, named on the Forbes 30 Under 30 list for his work on education policy and the 2020 Buckley Award recipient from America’s Future in 2020—is “a huge voice in the education world.”

“My other guest is a teacher named Dominique Rolle,” King said. “She teaches Black American History in high school, and she gave me incredible insight into what’s going on in classrooms.”

“The Quisha King Show” premiered Jan. 6 on Apple, Stitcher, and iHeartRadio. For those who prefer to watch as well as listen, King will also provide a video form of her podcast on her YouTube channel and will air weekly on Thursdays at 10 a.m.

“I hope to get even more conversations started,” King said in explaining her hopes for her new podcast. “I hope to get more parents aware of what our children are facing today and what’s coming through culture, education, and politics. I hope to inspire people to change and to realize that these ideas are not helping our children but in fact damaging them and we have got to make a change if we care about the next generation.”