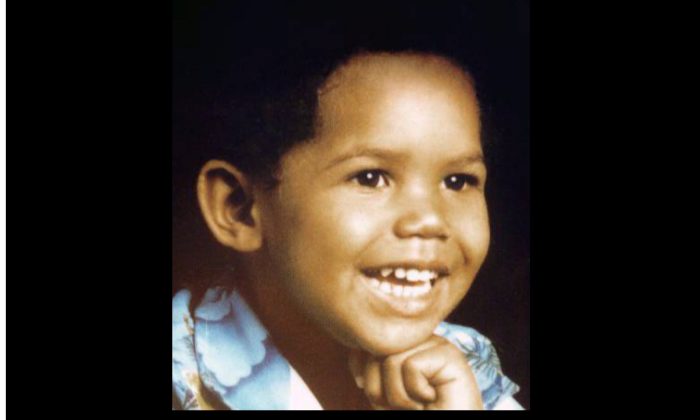 Amy Elizabeth Fleming of Dania, Florida has been charged for the 1986 death of her 3-year-old son Francillon Pierre, said North Las Vegas police on Feb. 11. (National Center for Missing and Exploited Children)
Crime and Incidents

LAS VEGAS—A woman who moved to Florida from the Las Vegas area a year after her 3-year-old mysteriously vanished more than 30 years ago has been arrested on a warrant charging her with killing the boy, authorities said Feb. 11.

Amy Elizabeth Fleming of Dania, Florida, was being transferred to Nevada from jail in Palm Beach County following her Jan. 29 arrest on a murder charge in Francillon Pierre’s death in August 1986.

Fleming, who was 28 at the time and is now 60, and her then-fiance Lee Luster told police that the boy, nicknamed Yo-Yo, wandered away from them at a Saturday afternoon swap meet.

.@NLVPD have scheduled a news conference to discuss a possible arrest https://t.co/7blaEH7h8y

“The parents have always been persons of interest in the case,” Leavitt said. “At this point, evidence points to (Fleming), but the investigation is ongoing.”

Luster, now 62, has not been charged with a crime.

Investigators questioned Fleming and Luster after the boy was reported missing, and Leavitt said they told police that Pierre’s father, who lived in Haiti, may have abducted the boy.

Felming and Luster tried to sell Pierre’s toys in a garage sale a month after his disappearance, reported Orlando Sentinel.

They were trying to raise money to move to Seattle. The sale was cancelled after a newspaper reported about it a day after of its being held.

Leavitt said the father was cleared as a suspect in 1986. Police are now trying to locate him in Haiti, the North Las Vegas police spokesman added.

Fleming and Luster married and moved to South Florida in 1987, Leavitt said, and had no recent criminal record.

Fleming worked at a marketing firm in Boca Raton where she was arrested by a fugitive apprehension team led by U.S. marshals.

The boy was officially considered a missing person, and the National Center for Missing and Exploited Children featured him in 2011 in an age-progressed portrait showing what he might look like at age 29.

Detective King, one of the original detectives on the disappearance of 3-year-old Francillon Pierre, speaks on getting closure on this case more than 3 decades later. @8NewsNow #8NN pic.twitter.com/e39BZNpS4g

Police in Nevada say piecing together torn-up jailhouse letters yielded a possible confession that led to the arrest of a Florida woman on a murder warrant in the 1986 disappearance of her 3-year-old son — now presumed dead.

North Las Vegas Police Chief Pamela Ojeda said Monday the discovery came after detectives reopened the case in 2017 and tried unsuccessfully to trace the origin of a fraudulent birth certificate application in the name of the missing boy, Francillon Pierre.

A police affidavit says that in one letter, the boy’s mother, Amy Elizabeth Fleming, told her then-fiance that “what happened was totally unintentional” and she was sorry.

Francillon Pierre was 3-year-old when he was reported #MISSING from the Broad Acres Swap-Meet in North Las Vegas, #Nevada in 1986.

His mother is now facing murder charges related to his death. https://t.co/PCJvdi3Dey

WINDER, Ga.—Officials say a baby was brought to a Georgia hospital with broken bones and that two people have been arrested.

Authorities say investigators were called to Northeast Georgia Medical Center on Wednesday and found that the infant was being abused. They also found that the child had numerous broken bones along with other injuries.

News outlets report that Almond did not disclose the baby’s condition or the child’s relationship to the suspects. Almond says an investigation is ongoing.

It’s unclear if the accused have lawyers who could comment.